This is going to be kind of an experiment for me. I don’t know how most gamers feel about their own gaming trends, but I’ve noticed that even when it comes to a game I love, I really need to be in the right mood to actually sit down and play something with any real dedication. This really gets to be a problem when a friend will want to play something together, but I’m in the mood for a different game or a whole different genre. I can’t be told to play video games on demand; it’s just not my style.

So what I decided to do was mix things up a bit. I’m going to play one game each week and write up my reaction to it here. This won’t really be so much a review (or at least that’s not my intention), but rather a look at how I felt while playing it, what I liked and disliked, what I felt was interesting or noteworthy, and any jokes I come up with while playing (which are usually only funny to myself). 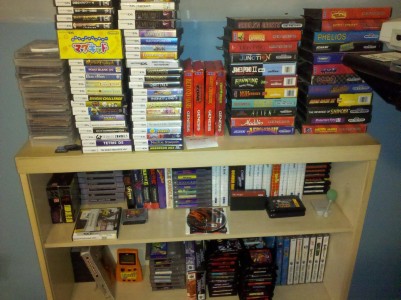 A small selection of the games I'll be choosing from

The catch is I have to pick a game randomly. I have just over 600 different video games as of writing this, and I’ll be using a random number generator www.random.org – really useful site if you ever need it) to first choose one of the 27 systems for which I own games, and then to choose a random game for it. This way I can’t just pick my favorites or decide what I’m in the mood for. I’m also doing it this way so that there won’t be any bias towards systems for which I own a lot of games. For example, I have over 70 Sega Genesis games and only 7 Vectrex games, so you’d think Genesis would show up a lot more frequently. However, since I’m first randomly choosing a system, it gives each system an equal chance of being chosen. Now that I’ve explained the rules, let’s get to it.

I was a bit worried that the randomness of my methods would lead to disaster, leading me to something that’s been covered to death or that is too current to make for a good number one post, but luckily the dice fell in my favor. Our first game is for the Atari VCS, more popularly known as the 2600, which is the second console on my list. I roll for a second random number to choose the game, and voila: Solaris. The only thing I know about this game prior to writing this is that it was published by Atari in 1986, which incidentally is the same year that the Atari 2600 Jr. I’ll be playing it on was released. 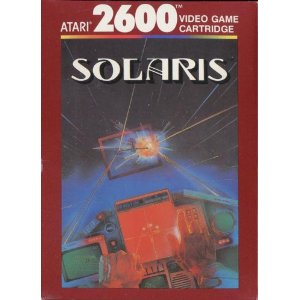 Fortunately, I also have the manual to the game in case I need to consult it, but I’m not going to do that just yet. First, let’s see what this game is like when I have no idea what to expect.

Well the first thing I see is what I would normally call a title screen, however there is no title on it. I see a purple planetscape, a yellow and red ship of some sort, and a copyright 1986 notice for D. Neubauer. I seriously wonder why there’s no title. Time to hit reset and start the game.

Ok wow. I had mixed expectations about this game. High because it was made in 1986, and by then a lot of people probably had some real expertise at making 2600 games. Low because of the look of the cartridge and the title, I imagined it being some kind of strategy game with spaceships, and I could never get the hang of those on the VCS. But I did not expect this. 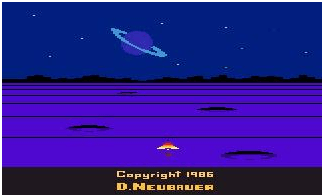 If I had to describe Solaris now, having just played my first game of it (with a score of 18,620), I would first describe it as gloriously psychedelic, mind-blowing oddysee (I can never spell that word right thanks to Oddworld) where you travel through space seeking out bounties and clearing the galaxy of scum and villainy. Then, once I had recovered from the seizure I suffered from the onslaught of colors, sounds, and flashing lights, I’d probably more realistically describe it at an arcade-style shooter in the vein of the Star Wars arcade game.

From what I can gather, you fly around to different areas of space and blast aliens or enemy spaceships or whatever these pixels are supposed to represent. Sometimes you’ll be flying through space as stars and planets zoom past your ship and other times you’ll be speeding around on a planet’s surface, much like Buck Rockers: Planet of Zoom (hopefully someone will know what game I’m referring to), although if I recall correctly, I hated Buck Rogers so this is simply a comparison of style and not quality.

The graphics are absolutely fantastic. Everything is in vivid color, and other than not really knowing what my enemies were supposed to be, you can really tell what’s going on at all times. The sound effects are full of delightfully retro explosions and other sci-fi fare. The only thing I don’t quite understand is what I’ll for now call the map screen. Each time you clear out a sector of enemies (I think that’s the objective) you’re returned to the map to fly to a different area of space. Once you get there you deal with whatever threats lurk, either planetside or among the stars. I think it’s time to check the manual. I’ll be back shortly.

Alright so the story seems to pretty much what I guessed earlier. The Zylons are attempting to take over the galaxy and the Atarian Federation (ha, I get it. Atarian.) has sent YOU to try to stop them and also to find the lost planet of Solaris and rescue stranded pioneers. It seems that this is done by flying around to different galactic quadrants and finding Zylon planets which you will need to destroy. There are also Federation planets at which you can refuel and repair. You need to clear out sectors of Zylon forces and defend Federation planets from being destroyed. 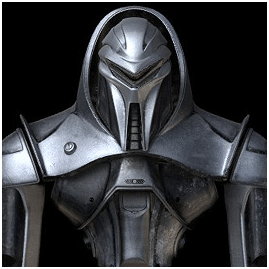 Artist interpretation of a Zylon

Ah, here is something useful. At one point while I was playing, the screen began to flash red and my joystick controls became reversed (making the game furiously difficult) and it stayed like that for the rest of the game. Apparently, this means that a Federation planet was destroyed and the galaxy is now a Red Zone. You need to listen for alarms or check your map (Galactic Scanner) to know when Zylons are attacking a planet and you then have 40 seconds to defend it. Hmmm, it seems this game is quite a bit deeper than I anticipated. If I can sum it up concisely, your goal is to find Solaris, which appears as a blinking planet on your map. While searching for it you must defend Federation planets from Zylon attacks while destroying Zylon planets. That’s about the gist of it.

Well, my score was higher, at 23,380 this time. However, I seem to have run into a gamebreaking issue. On your Galactic Scanner there are Zylon planets which need destroying, Federation planets which need defending, wormholes which send you elsewhere in a sector, and several different types of enemies you can encounter. There are also what the manual calls Star Clusters, and these are basically the obstacles that block your path, so that you can’t simply move freely around the map, which ensures that you’ll have to fight your way through enemies in order to get places. 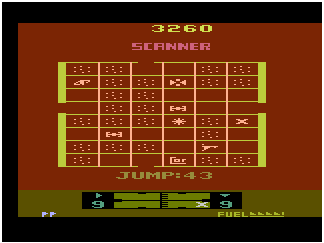 Galactic Scanner. Star Clusters are marked by dots while your ship is marked by the X.

It makes sense, but the problem is that you can’t move through planets or enemies either. This makes sense with enemies, but that fact that you can’t move through Federation planets is quite strange. My problem arose when I flew threw a wormhole, which I hoped would send me to the other side of a wall of Star Clusters towards a Zylon planet I wanted to destroy, and it instead sent me into an enclosed pocket, surrounding by Star Clusters and one Federation planet. I could land on the planet, refuel and repair, and then leave, but once back to the Scanner I was unable to move past the planet still. I was trapped in a corner of the Galactic Scanner. I’m not sure if I don’t know how to use wormholes correctly, but it seems that they send you to a random location. Since some locations are completely blocked off from the rest of the map. That’s kind of a bummer. 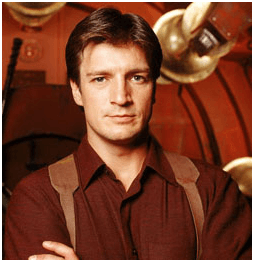 I couldn’t help feeling like Malcolm Reynolds while playing this game.

That aside, so far Solaris is fantastic. It has two varieties of fast paced shooting action (three if you include the more difficult “corridor planets”), absolutely amazing graphics for the 2600, and it definitely instills a real sense of thrill and urgency in me. When you hear that alarm sound and you know you only have 40 seconds to defend a Federation planet, it really gets you motivated to put those Zylons down. Combine that with a pretty nice variety of enemies, both in terms of appearance and combat strategies, and you have a pretty diverse and in depth game. I really feel like I’m traveling the galaxy, defending the galactic federation, and searching for the lost planet of Solaris.

There aren’t a ton of VCS games that I really, truly enjoy enough to play them over and over again. Among the few are Pitfall, an absolute classic and a great platformer, and H.E.R.O. which is my all-time favorite 2600 game. I think Solaris has the right mix of action, strategy, and out-of-this-world (excuse the pun) audio and graphics to really offer a nice big chunk of gaming that you can really sink your teeth into, even if only for an afternoon. Even for those who aren’t really into retro gaming, I think it’s accessible enough to the modern crowd while still maintaining its retro charm. I was going to write a parenthetic addendum to that sentence saying it’s accessible as long as you know what to do, but considering I had no idea what was going on my first time playing and still had a good time with it I guess that’s not really true.

I really wasn’t sure what to expect when I decided I was going to choose random games to play. Out of the 600 games in my collection, I have a LOT of games I’ve never played before. I even have a few that I really don’t want to play, either because I’ve lost interest or got them for free or whatever. I’m pretty happy with this first one though. I expect I probably won’t really enjoy every game that I do this with, but perhaps this positive first experience will give me the motivation to clear out more of my gaming backlog and hopefully find more gems like Solaris.