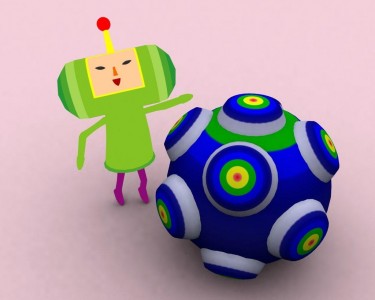 Katamari seemed to come out of nowhere when it first hit the PS2 back in 2004 and became an instant cult classic. The series then went on to create quite a name for itself with later entries on the PSP, PS3 and even the Xbox 360 and now it is looking like Namco have yet another title in the works for the franchise. For all of you who enjoy rolling up the galaxy for the King of All Cosmos, your in luck as this one could be a whopper, quite literally in this case.

Siliconera recently revealed that Namco have filed trademarks for the names “Katamari amore” and “Katamari amore Rolling Whopper”. My first thought after hearing this news was for a 3DS release as the bright visuals would and quirky style would fit in well with Nintendo’s handheld and the game would look fantastic in 3D, but now that the NGP is confirmed to have two analogs, it could very well be one of the first NGP titles. Right now though nothing is confirmed and this is all just speculation, but either way the world better brace itself as Katamari is gearing up for a return as we speak and hopefully soon Namco will shed some light on Katamari amore.

Nintendo to Shatter Records with Kirby and Bubble Gum