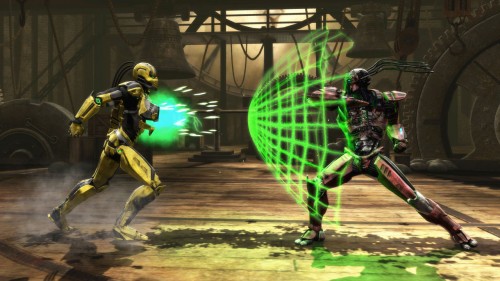 Mortal Kombat has got fans yet again even more excited, with the in depth, behind the scenes introduction of a the newly introduced mode ‘Challenge Tower’ which has amazed all. While basically it is just event matches and training modes, the creativity behind it all is truly impressive and deep for fighting game, expanding on the engine and looking very fresh!

Various modes to train you include having body parts severed so you must fight without them, shooting projectiles into moving buckets to practise aim, taking on up to six zombies at a time, and having your feet stuck to the floor, among others. Within the various 300 missions, one particular challenge which looks interesting is called ‘Orange you glad I came?’ where the player is a team combination of Scorpion and Sub Zero. Shao Khan is also constantly changing colours, between orange and blue.  When Khan is Blue, only Sub Zero can harm him, and when Khan is orange, only Scorpion can cause him damage, making the player have to think on his/her feet and constantly swap between the two fighters to defeat him, keeping players on their toes and thinking on the spot. A huge fuss has been made of the final challenge, ‘End Game’, which has been really hyped up that only a hardcore Mortal Kombat player can possibly beat. Get ready folks, its gonna be a tough one!

Making an epic return is mini games, and even more crazier than ever! The legendary ‘Test Your Might’ makes a triumphant return, as well as the nail-bitting ‘Test Your Sight’ from more recent games. A welcome new addition that looks a lot of fun is ‘Test Your Luck’. The player is shown slot reels that would pick random modifiers that will effect your gameplay. These can range from who you will fight, who you will fight as, fighting upside down, double damage and many more. Apprently the idea was so popular over there in Netherrealm Studios that they decided to create an entire mode for the ‘Test Your Luck’ mini game. Be excited brawlers!

Do note however, in Australia this game is still banned due to its violent content by The Australian Classification Review Board, although Warner Brothers is currently seeking an appeal. You can SIGN THE PETITION HERE to help rid of the ban, and help us influence video gaming history! For more information on the petition, go here, or to learn more about the ban, check this out. The more awareness we can raise, the better fighting chance future mature games have down under.