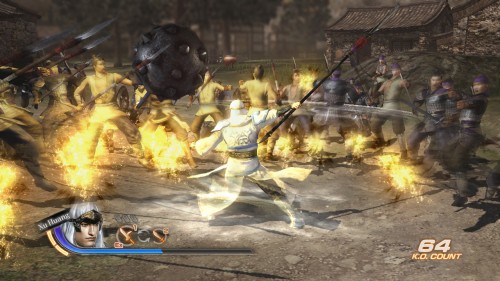 With Dynasty Warriors 7 only a mere 10 days away (unless you live in Europe, then it’s…20 days) Koei released some new screens and a video showcasing some gameplay in English.  For those who may have forgotten or are simply unaware, this installment of Dynasty Warriors brings back the traditional charge based attack system that many are familiar with, which you can see for yourself in the video.  This installment also features weapon swapping, allowing the player to have two weapons equipped and granting the ability to switch between them on the fly, even mid-combo.

Now a traditional DW vet will consider this blasphemy, changing up the warriors’ original weapons.  Fret not, as their “ultimate” EX attack (musou) will have them revert to their iconic, classic weapon style.  Xiahou Dun and his sword, Lu Bu and his halbred, etc.  This way the characters still retain their classic origins but allow the player to utilize whatever weapon they wish.

The graphics have received a decent upgrade since DW6 (not that 6 looked bad).  The most notable visual changes are the character models themselves getting a new, re-imagined look which really gives the franchise a fresh coat of paint.  Overall the game looks pretty great and seems poised to please hardcore players and newcomers alike.

Check out the screens and video for a better look.