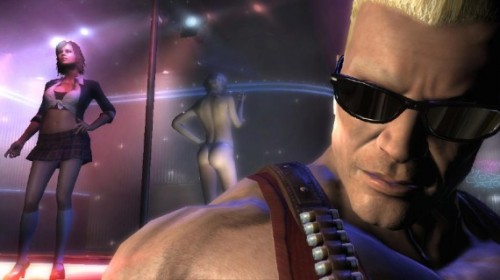 A game like Duke Nukem Forever could go the standard route of video game multiplayer but then again, that wouldn’t be Duke’s way now would it? Sure there are your standard multiplayer modes with just a bit of a change in name such as Dukematch, Team Dukematch, Hail to the King and then the Capture the Babe Mode. More on that last mode in a bit.

Players will be doing battle on ten different maps and will be able to level up by gaining experience from killing other players and completing objectives. The maps themselves will limit players to 4 on 4 matches and a number of the upgrades that can be unlocked include jetpacks and the Holo-Duke item from past games.

Now remember that Capture the Babe mode I mentioned? It will involve your character grabbing the other teams woman and will require a slap to calm her down in case she starts to freak out which will happen from time to time as you carry her to your base. There isn’t much more detail than that at the time from the OXM but I don’t think Duke is the kind of man to slap a woman in the face, so that leaves only one other option.