37,989 years is a pretty long time to wait to experience the next chapter in the Dawn of War series. I mean, you might even be dead by then! So don’t be a sucker! THQ has announced that the second expansion pack for Warhammer 40,000: Dawn of War II has been released, titled Retribution.

As each expansion is known to do, Retribution adds a new race to the roster; the Imperial Guard will now be playable in both single and multiplayer modes, as well as adding new multiplayer maps, super-heavy units, and a new Last Stand hero and map. In addition, extra units will be available for the existing races, the Space Marines, Orks, Eldar, Chaos and Tyranids. There are also downloadable packs for each race, granting additional abilities and wargear, at a price of $1.49US each or $7.49 for all six.

The expansion marks several firsts for the series; the single-player campaign is now playable with any race, rather than telling the story only from the Space Marines’ point of view. Also, THQ have made the switch from the Games for Windows Live platform to Valve’s unstoppable Steam system. As a result, Retribution is a stand-alone title, meaning it does not require the original Dawn of War II or its first expansion, Chaos Rising, to play. Unfortunately, it also means that players cannot carry over characters and campaigns from the previous games.

Details on the campaign story are slim, but enticing. Set ten years after the events of Chaos Rising, Sub-Sector Aurelia has been a constant warzone. As the fighting intensifies, players are given the opportunity to choose a race, and consequently determine the fate of the sector.

So don’t risk not being alive in another 38 millennia to experience it firsthand – get a copy now. 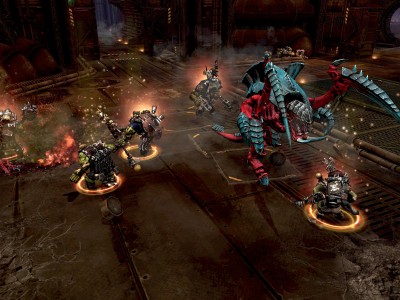