Gaming isn’t all about gunning people down or replenishing mana. We gamers have a light-hearted, fun side too and XboxAustralia seems to be tapping into that with their new video, “Can You Outdance Kylie?” 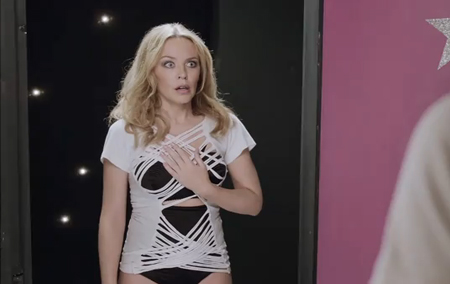 In this video, a dude (his name is Darren, for all you gamers who want to know) recreates Kylie Minogue’s dance moves from Can’t Get You Out of My Head in the Kinect game, Dance Central. When we say recreate, we mean recreate…remember that white silky thing Kylie was wearing? Yeah, Darren’s got that on. Kylie’s gold shorts? He’s got that too. In fact, the only thing missing from Darren’s impersonation of Kylie is a blonde wig…

Kylie makes an appearance in this clip too to promote her ‘Les Folies’ Tour 2011, which is sponsored by Dance Central. She even comments on Darren’s stylish moves and Kinect: “What can I say – Darren’s got the moves!  When I saw what Xbox and Dance Central wanted to do, it was very hard to resist being involved.  I love comedy and the film not only makes me laugh, it reminds me that anyone can become a great dancer.”