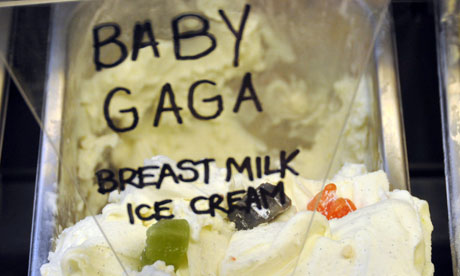 It seems that the entire population went gaga when Charlie Sheen’s exploits were revealed.  And when he joined Twitter, news stories popped up faster than the Millennium Falcon.  Plus, he reached a total of 1,000,000 followers in near record time.

Apparently, Lady Gaga (another of Twitter’s most popular people) just couldn’t take being shunned by the press for so long a time.  I mean, come on!  A meat dress will only titillate the people of the world for so long.  So, away she went to the legal system.  Lady Gaga is now threating to sue an ice-cream distributor in London.  But wait! It gets better!

Now why would the worlds most popular pop star want to sue a company that makes ice cream?  For starters, this particular ice cream was made of human breast milk.  Yes, ‘Baby Gaga’ is an ice-cream made from human breast milk, mixed with a delightful combination of vanilla pods and lemon.

Thankfully, inspectors from Westminster council’s food standards department confiscated the remaining ice cream a few days ago, citing that “selling foodstuffs made from another person’s bodily fluids can lead to viruses being passed on and, in this case, potentially hepatitis”.

Of course, the owner of the establishment, one Mr. Matt O’Connor disagrees, saying that the donor of the milk, “is a registered blood donor. So she has been screened both by us and a clinic.”

He goes on saying that he feels like a man “wielding two spoons engaged in hand-to-hand combat.  (Lady Gaga) described me as the ‘controlling mind’ behind the ice-cream, which makes me sound like Blofeld, in a James Bond movie, bent on global domination.  A global superstar has taken umbrage at what she describes as a ‘nausea-inducing’ product. This from a woman with a penchant for wearing rotting cows’ flesh. At least our customers are still alive when they contribute to our ‘art’.  She claims we have ‘ridden the coattails’ of her reputation. As someone who has … recycled on an industrial scale the entire back catalog of pop culture to create her look, music and videos, she might want to reconsider this allegation.  How can she possibly claim ownership of the word ‘gaga’ which since the dawn of time has been one of the first discernible phrases to come from a baby’s mouth?”

It is hard to believe that a single news story could incite someone to hate both parties with a passion.  However, both of the people in this dispute are nothing but bone headed fools who need a good smack in the head.  Someone please call Master Chief 117 (and with that, this article has a videogame reference.)   Winning!