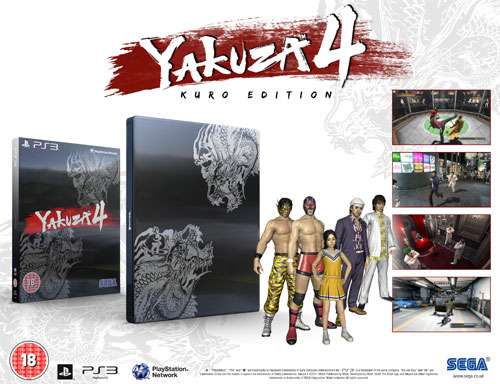 Never say that a used game company hasn’t done anything for you, at least not if you are living in the UK that is. GAME, the UK retailer, has listed up an edition of Yakuza 4 that is called the Kuro Edition. Kuro means black in Japanese, such as kuroneko meaning black cat. Now this Kuro Edition will include a steel casing to help protect your usual flimsy plastic game case.

Despite the fact that the steel case is nice already, there are additional in-game contests which include new costumes for all of the in game characters, such as the wrestling outfits and suits seen above. Also given out is a survival mode where you must battle against bosses from the game, a underground fighting arena, and a racing mode apparently. Perhaps the most interesting feature for this package is the fact that it costs the exact same amount as your standard edition game, which is listed at £49.99. There is no sign of this edition going international at this point in time.