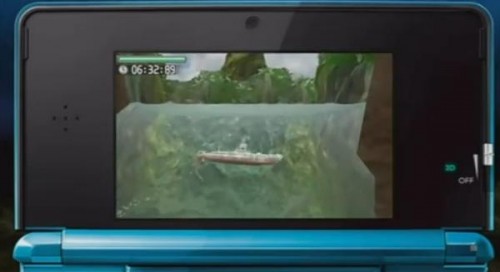 Nintendo are known for every now and again publishing titles which are a bit out of their general market (Rhythm Heaven, Glory of Heracles..ect), and their new 3DS title, Steel Diver, is just that. Steel Diver is a side-scrolling underwater title in which players control a submarine with a touch-screen based control setup. Nintendo have finally released a trailer for the title which shows off some of the gameplay and visuals and I am a bit intrigued on this one as it seems to remind me oddly enough as a mix between Ecco The Dolphin & Dive: The Medes Islands Secret.

Of course the trailer itself is not in 3D but the graphics still look appealing and the control scheme seems to be a fresh take on a side scrolling title in general. A bit of gameplay is also shown as we see the small sub dodge some obstacles that are sure to utilize the top screens 3D functions. I am all for Nintendo going out of their safe zone of familiar franchises and this could be the first gem on the 3DS. Check out the new trailer below and you can dive into Steel Diver when it releases with the 3DS on March 27th.