With the impending release of Epic Games’ latest first person shooter instalment, Bulletstorm, scheduled for release on the 24th of February, gamers with access to the downloadable demo have been given an opportunity to test and see if it lives up to the standard that we’ve come to expect from the creators of ‘Gears of War’. How does their venture into the realm of first person shooters deviate from their previous experience with third person? And does it stack up against the myriad of FPS titles already available?

When accessing the demo, player are provided with access to a score-attack game type mode called ‘Echoes’. You take on the role of a self-proclaimed infamous space pirate (and Marcus Fenix doppelganger) named Grayson Hunt. To get a feel for the basics of gameplay, the good Mr Hunt walks players through some of the basics in terms of controls, and how to score points by disposing of enemies in the most creative, or gruesome ways possible. The purpose of this gametype appears to be to have players shoot, kick, leash and blast their way through the ‘Collapsed Building’ stage in an effort to rake up as many points as possible. The points collected are uploaded to international leaderboards where players will be able to compare carnage with their friends. But how does one ideally increase their score?

During the introductory video, Grayson makes the claim that he wants to see the players “Kill with Skill.” Sure, you might be able to simply fire your weapon at an enemy to kill him… But why do that when ALTERNATIVELY, you can use your energy leash to pull an opponent towards you, kick them into the air and fire a charged shot from the Screamer, which then turns the hapless mid-air suspended sucker into a living firework? Then, having the resulting explosion fling his nearby allies off cliffs, into sharp impaling debris, or into the path of an oncoming train? As you can imagine, the latter strategy is the one that rakes in the big points. The best players will use every weapon, tool and environmental aspect to their advantage. 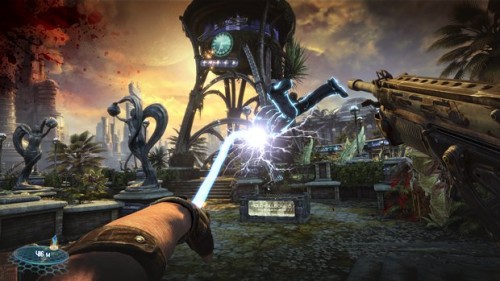 Too often it has been found that no matter how well refined a modern First Person Shooter is, the ways in which players are able to kill opponents are limited, and games can quickly get bogged down in a cycle of repetition. Bulletstorm however takes a different approach by providing multitudes of ways to kill off waves of mutant freak-shows. It must be said that there is something gruesomely satisfying about kicking an enemy mutant into wall mounted spikes.

This is not to say however that this demo is without its own respective flaws. Immediately players will notice that the game is lacking a “jump” function, which many consider to be a standard move for FPS games. Instead the ‘A’ button function acts as the “dash/slide” command. Coming from a company whose major success was in the third person shooter genre, it is understandable why the developer may have chosen to omit this function. After all there was no need to make Marcus or Dom jump around during the Gears of War games. However, in a first person shooter, this gravity bound player feature will take some gamers a while to get used to.

Whether you’re 100 per cent devoted to buying the full release of the game or not, the demo is certainly worth a try. It definitely achieves the purpose of providing a satisfying sampler of gameplay without spoiling too much of the upcoming story, gameplay features, multiplayer capabilities or levels yet to come. If you are simply eager to get into some ass-kicking, Bulletstorm is a game for you. The full game is scheduled for an Australian release on Febuary 24th. (Available on Xbox360, the PS3 and PC)