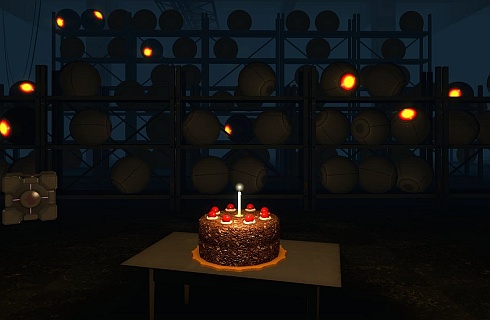 Just like many other people, I am quite excited about the release of Portal 2. I loved the first game, and a second game that adds more puzzles and more elements is simply full of promise! Add co-op on top for you and a friend and we have a package asking to be played. The achievement list in a game is something that always tells me a good estimate of just how long the game is going to last me and how much fun I will have. With that knowledge, I am excited about this achievement list, while disappointed at the same time. You can see the full achievement list after my thoughts.

The list is simply too ordinary. By beating the game in both single player and co-op you will pretty much unlock almost 75% of the achievements. There also isn’t much incentive to go back and replay the entire game; just reload the level you need, get the achievement, and go to the next one. There are a handful of achievements that basically require you to do a random task in a specific chamber, but none of them seem that difficult. I was really hoping to see a few more like “Out of the Blue” from Portal: Still Alive; now that was a fun achievement! What more could you ask for? The achievement pretty much changed the entire way you think and play the game.

Keep in mind, I don’t know how hard any of these achievements will be to get and this is completely based on speculation, but the one achievement that may actually be challenging to get is:

Honestly, once you beat the game in co-op will there even be a single person out there who hasn’t played the game? I guess it is time to trade 48 hour trial codes with friends so that everyone can make a new account just for this one achievement.

Overall, the achievement list isn’t that bad and I guess I was just expecting a bit more. I don’t know how long it will take to beat the game but once the game is beaten I only see about another 2 or 3 hours of gameplay to clean off the rest of the list.Check out the list for yourself and tell us what you think. There are also 5 avatar awards: 3 shirts, 1 hat, and a companion cube prop.