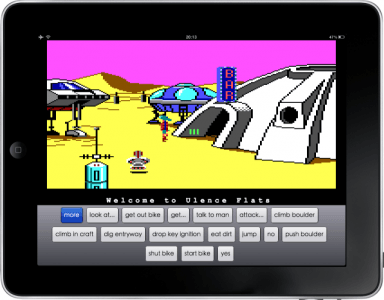 In addition to reducing productivity at work, retro game developer Q42 looks to change the quality of games we play with browsers using HTML5 and their site Sarien.net. Starting as a simple retro chat environment then evolving into a full-scale Ipad game using HTML5 without the need for the App Store, surprisingly this little start up didn’t concern Apple as much as it did Activision.  This was due to the fact that the games being ported into Browser Based experiences were Sierra games, which Activision owns the license to. The Co-Owner of Q42 Martin Kool had been developing this technology since 2003 and was only recently brought into the limelight due to the success of their Sierra Ipad Game, which effectively shows what the Ipad can do without the App Store.

This is when Activision came knocking with a Cease and Desist Letter.

But this was a blessing in disguise, Activision proposed to officially authorize Sarien.net to publish the first game of any series in its multi-player HTML5 form. One of the requirements is that the site links to steam, which is a pretty big deal for a little start up like this. This site will allow games like Space Quest, Police Quest and King’s Quest to be played in your browser at no cost, and eventually other games on the Ipad, which cuts out the middle man (Apple). Coincidentally the Ipad version of Sarien.net released around the same time Apple decided to start collecting subscription fees for App Store distributed services such as national newspapers, as such Q42 looks to provide an alternative that can cut out Apple, effectively deterring subscription fees. Either Apple will work with Q42 or see them as a threat, but it’s an interesting time for Browser based gaming and it’s future.