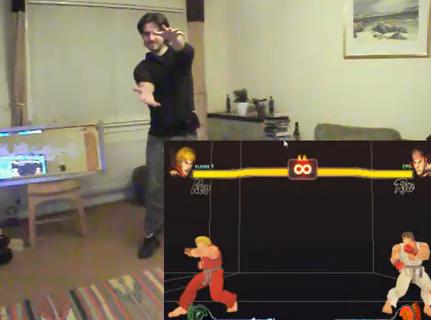 The Kinect sold like crazy during the holidays and while the technology is interesting and fun, it seems hackers have been tapping into the full potential of the unit. The latest comes a video originally posted over at Shoryuken.com in which a hacker under the name of demize2010 uploaded a video of himself playing Street Fighter with a Kinect. Now it isn’t the most thrilling video to watch as he is not doing chun-li spinkicks or anything like that, but each time he extends his arms, Ken on the screen throws out a Hadouken so this is a very impressive use of the device.

As you can tell by the video, this is mainly just a test run but it is interesting to see just how broad the range of titles the Kinect could be if Microsoft and other developers actually give it a try. Throw in that nunchuck lack controller to actually move that this guy has, and yes, I could very much see myself purchasing a Street Fighter Kinect title. Check out the video for yourself and let us know in the comments section what games you would like to see Kinect-ified.