This Community review was written by Community Contributor Raphael Duffy. This review has been revised by Dylan Radcliffe. The editor has tried to avoid completely changing what the original Author intended to say; this may cause some Grammatical or Spelling Errors to still be in place from the original Author and overlooked by the Editor during editing. You may also notice the writing style of the particular editor slipping into the Community review, this cannot be avoided. We also try our best to spot plagiarism, but the internet is vast; so if you see this review anywhere else on the web that is not linking directly to our site please contact us immediately at Info@capsulecomputers.com.au with the subject “Review Problems” and any information that may be of use to us. The following Review does not directly relate to the thoughts and opinions of the Capsule Computer’s staff and is just a review written by a community member who wants to share his or her thoughts on the following game.

Dead Space 2 is only a few short days away.  To get us all in the mood we have a community site contibutor review of the original Dead Space for PC. 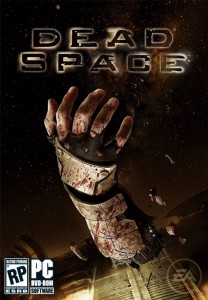 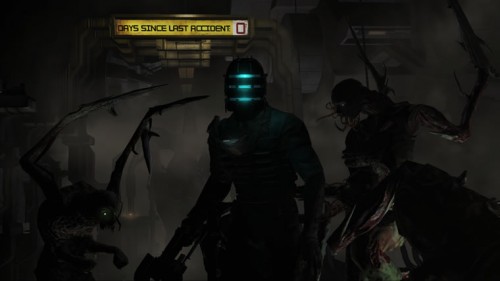 Story
Set in the distant future where mankind is stripping entire planets of resources; you play as Isaac Clarke, an engineer trying to find out what’s wrong with the Planet cracker ship, The Ishimura. Hopefully he will also find his love, Nicole who is somewhere on the ship. The game tasks the player with trying to unravel the mystery of what went wrong and why there are weird shaped humans (necromorphs-they look normal  but with a few extra limbs and minor alterations here and there) trying to eat you. The story is really good and draws you in through the use of audio logs, radio communications and simply being with the person. The story itself is engaging, full of twists and isn’t that hard to follow. 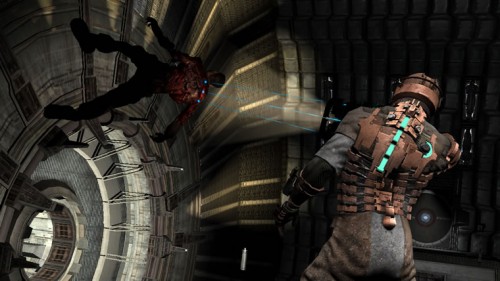 Gameplay
Set in third person, the player controls the camera with the mouse but with the press of a button you switch too aim mode where you can shoot your weapon; however, aim mode causes you to walk and turn slower. The enemies are killed by dealing enough damage to each enemy. The player can use the weapons too cut limbs off in order too deal more damage and sometime simply too weaken them such as cutting off their legs; however, some enemies can only be hurt in certain places. This combat system matched with the cool weapons that all have alternate fire modes which is all really fun, but you can run you can low on ammo pretty quickly (all your ammo, health and other necessities are shown on the back of the character model) and this is where “survival”  part of the game comes in. Outside of combat you try to find more credits, ammo, schematics (for new weapons) and power nodes that add a very engaging aspect to the game. The player can use the nodes too upgrade weapons by linking them in a chain to reach position on a network that change the stats by a few points. There is melee but it is weak along with leaving the player vulnerable but they can knock enemies back so you can shoot them plus the stasis and kinesis modules help to hinder the enemies. The stasis module slows enemies a lot though requires ammo or a recharge at some points, the kinesis is used to levitate objects to pull in far away items or move them.

Lastly there is oxygen levels and zero gravity combat. The oxygen levels appear in some sections where there is no oxygen in the area so the player has to rely on the oxygen tank which is refilled at oxygen stations and in areas with oxygen. Zero gravity combat is like normal combat but with genuine three dimensional gameplay, you can jump from any big flat surface too another and so can the necromorphs so players have to watch not only their back but what’s above them as well making combat a bit more challenging and fun. The things I disliked are the rather small amounts of enemies you face at any one time (you’ll face two or so most of the time but some fun and rather hard encounters can have many more) and the boss battles were fun but the attack patterns were a bit simple. Another problem was that there was no multiplayer and the campaign was actually free roam inside levels but it played out rather linear in some parts, but extra things such as big rooms, some necromorphs and zero gravity combat stopped this from being a major problem. The environments cleverly use layouts too affect the difficulty that make killing the same enemy in different areas even more fun, one other problem is that the game is designed for the player not to move away from the objective path (you can a bit for rooms along the side that might have a few more enemies and more items to take) so the enemies are only found by following the objective path and this means the game plays out completely linear and apart from one distraction (I won’t spoil what it is) you really do only complete the story and that is it. 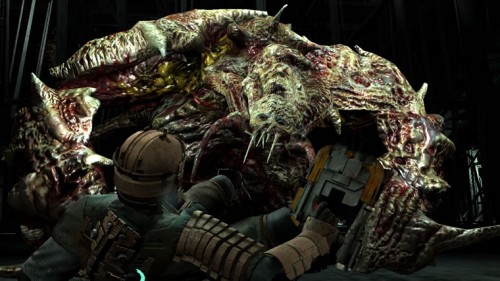 Audio & Graphics
Dead space looks great, even on none super powered pc’s. While the environments can be a little repetitive they are still nice and none of them are ever exactly the same but the camera gives you a really good view and it works really well. The audio is good and the voice acting is definitely great (not stand out of the crowd great but very immersive great), the music and sound effects really do make it creepy and have you on edge. 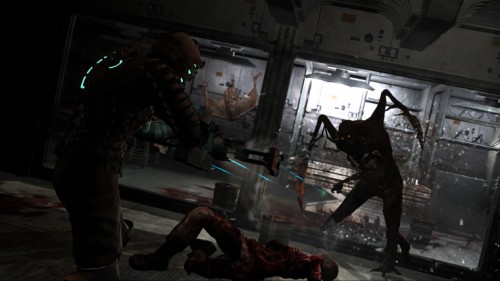 Overview
I finished the game in only 14 hours (it wasn’t a speed run, I tried to pick up every object and get everything) and wasn’t satisfied so I completed it again but it was fun and had me hooked right from the start with some very inventive ideas and great story that really hook the player. One of my favorite single player only games and now that it’s in EA’s value games range it is very cheap for pc, if you like blood, epic guns a good story then don’t wait for number two, get this first.

Cons: single player only and nothing to do but follow the story to where it takes you, a bit short for a full game

Game Rating:
it really is just one story mode designed for one play through but a really good one at that.