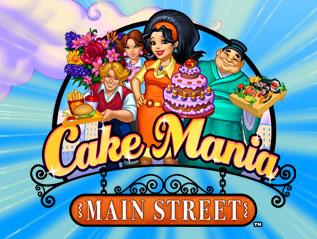 There is no doubt that when it comes to casual titles, the Nintendo DS has been the perfect home for quite an array of some spectacular pick-up and play games, which is just another reason the handheld has been so successful to start with. Majesco & Sandlot Games very well know this, and are preparing to launch Cake Mania’s fourth installment, Cake Mania Main Street, on the Nintendo DS. Instead of staying in the bakery like many past titles in the series, players will get to break out and upgrade their equipment within new shops including Jack’s Burger Barn, Risha’s Flowers and Tiny’s Sumo Sushi. Each location will also feature more than 50 upgrades to be purchased with the cash earned from the humorous cast of customers.

Cake Mania has certainly been successful over the years as a whole with over 2 Million copies downloaded and over 700,000 of the Nintendo DS versions sold to date, and Cake Mania Main Street looks to be the perfect addition to the series. No date is set in stone at the moment, but we do know that aspiring bakers will be able to get their hands on this one sometime this Spring.

Aksys Press Release Theatre Boasts on the successes of 999…

May’s Mysteries: The Secret of Dragonville gets first trailer