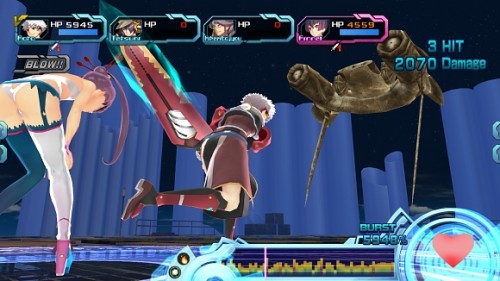 Despite having plenty of suggestive dialogue and having girls wearing relatively skimpy clothing NIS America has yet to receive an M rating on any games that they have brought overseas to the US. But that has just changed as the ESRB has given their upcoming JRPG Ar Tonelica Qoga: Knell of Ar Ciel a M rating. Now what exactly does the game contain that makes it even more suggestive than previous games released by NIS A? Find out below with the ESRB‘s description:

This is a role-playing game in which players control a character named Aoto, an apprentice who becomes entangled in a three-way war on the fantastical planet of Ar Ciel. Players roam through towns and use swords and magical attacks to engage monsters and human-like enemies in hand-to-hand combat. Battles are accompanied by punches, kicks, colorful light effects, and loud cries of pain; enemies collapse or disappear in brief flashes of light when defeated. Some power moves cause female characters’ clothes to vanish in layers; the characters are often depicted holding (covering) their breasts, wearing only underwear, or standing behind strips of light that obscure their genitals.

In one cutscene, male characters encourage a woman to strip (e.g., “Uh . . . do I have to take off even more clothes…?” and “Quit teasing us and do it already!”); another sequence depicts a male character “removing” a magical crystal from a female character—this scene is accompanied by suggestive moans and comments (e.g., “Aoto’s putting his hand inside Soma” and “Fumble around every inch inside of her . . . you will find what you’re looking for . . . !”). One brief cutscene depicts a female character’s exposed buttocks. The words “sh*t,” “a*shole,” and “b*tch,” appear in the dialogue.

It sounds like most of the transformation sequences are why the ESRB gave the rating, plus I can guess that the second paragraph didn’t help out very much either. But regardless of this fact it is good to see some more information for the PS3 RPG which has yet to receive a release date yet even in the US.