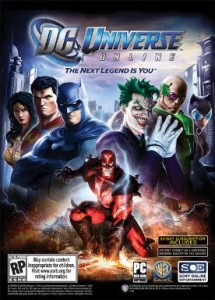 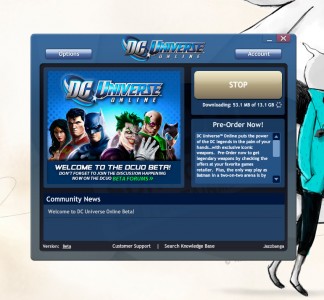 I finally got my BETA keys just before the weekend and spent quite a few hours on the DCUO PC servers questing, PvPing and hilarious ganking ofcourse. Running around and ruining the general gaming experience of others in latex has never been so much fun. After quite a large download (13 gigs) overnight I was ready to create some sort of anti-villain. Initially I was going to test the BETA on the PS3 (check details below to win a PS3 Beta key), but after a quick twitter search I found people complaining about frequent crashes, so I’ll pass for now otherwise I’d be ranting about my broken PS3 control from throwing it etc etc. However I will be downloading the PS3 version tonight so we can get some comparisons going later on, it’d be nice if they ran off the same servers, but people are already trying to get that happening through a petition directed at Sony. By the way I’m writing this by level and experience as I go on. I rolled a villain, the jokers my mentor; I chose the sorcery powerset (healing) and two-handed weapons! It’s basically a big F off hammer… I look like a Sleazy Paladin! 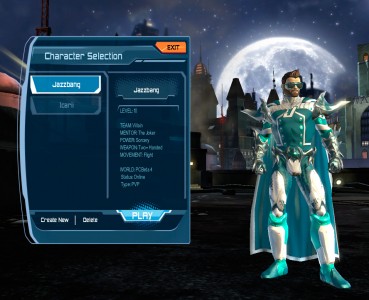 "What a sleazy looking anti-hero"

Once you’ve started up the game a rather impressive war-torn cinematic is shown to explain the story, whilst this is appreciated and rather well done, I couldn’t help but feel that the time travel concept was a little vague. I’m assuming it’s because I’m not well read in comics, other than that the plot has a nice way of inserting new heroes from the planet into the mix. It’s biological baby, and once Lex Luther has finished explaining the prelude, the character creation fades in.

Obviously this has to be no less than awesome, initially I wasn’t too impressed by the some of the offerings, but it’s the changes you can make in game later that are the real winner. Not once did I see anyone looking similar, and that’s what people are looking for. The creation process is pretty slick, and it took me about 20mins to make my villain, but I imagine people will spend more time with the amount of customization here. You can choose to create your character from other iconic heroes, which act as templates, or customize it yourself. Some of the presets to choose from in custom are pretty lame, and I don’t know why anyone would choose these, but I doubt anyone will keep their initial masterpiece.  Mostly because having the option to change your appearance based on any new item is too much fun, it’s irresistable and collecting styles is a neat idea for the players future. It’s quite a versatile way of customizing and provides alot of control over your appearance, all the way through the game. And assuming the “market” which is currently unreleased in game will add to these styles even more, the wealth of options here is impressive. 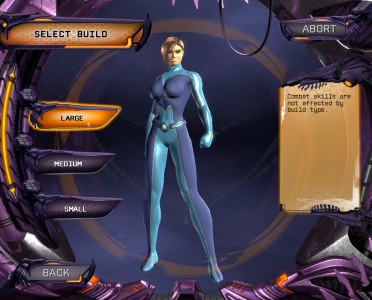 I haven’t had the chance to play every single class yet, so I won’t pretend to know their differences and game-breaking abilities, but impressions so far seem promising. PvP combat is available in the first 10 levels, it works by letting you play iconic characters such as batman, robin, huntress and superman etc based on your level, you unlock different characters as the game goes on. They come with preset moves and it’s matter of learning their strength’s and vulnerabilities, my first experience was frantic to say the least. This is a fast paced game and it seems alot of it works around stuns, which can be broken out of by holding down shift. Who is the best at stunning the crap out of each other? As I said I haven’t had the chance to play all different characters (only level 10!), but these are the impressions I get, and the pace of combat definitely enjoyable. How this works in terms of strategy is beyond my level of play experience so far, but I wasn’t the only one as everyone seemed to have no idea. 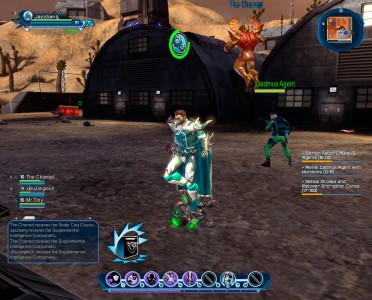 "Leeching off others in latex"

PVE combat was quite addictive, that has to be a good thing right? The first quest to escape Brianiac’s ship was a good introduction and explained the ropes quickly. Based on my experience with previous games in the genre, the combat feels like a mix between Diablo, WoW and PSO. You spend quite abit of your time clicking to timed combinations and other abilities are set to the hotbar below. It might not sound like anything particularly new, but it’s definitely fun because the fast pace and variety of abilities/stuns keeps things interesting. Not to mention the travelling, which gives you three options at the creation screen, flying, acrobatics or super-speed. Thanks to this, moving around cities and questing never feels like a drag, and later on the option to level up movement speed and other combat related benefits is much appreciated.

You could quite easily level solo to the cap, which is probably a good thing, because right now the social implementation isn’t too great. There’s too many presumptions the player has to make to interact with people around them, such as knowing to type /shout to chat to everyone around or /group for the group. It doesn’t help that the text is all the same colour; the lack of differentiation between the channels can be off-putting and requires too much focus.  Most people playing the Beta probably know this sort of thing, but a novice MMO player would have no idea (your hot girlfriend for example). 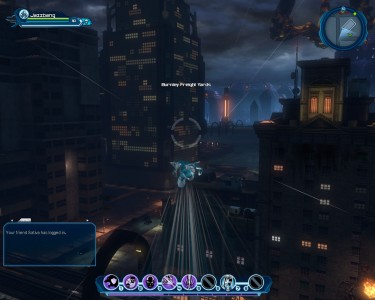 "I'll catch that targeting circle if it's the last thing I do!"

The friend’s list is also something to be desired, once again lacking in simplicity and explanation. None of it feels very user-friendly, however this is the BETA, so hopefully grouping and interacting with other players is streamlined as time goes on. The UI does work well enough, but it can be quite sluggish at times and needs improving, especially if your connections lagging. I know SOE are trying their best to have something that works on both PC and PS3, so here’s hoping it can be pulled off. But right now, I don’t even know how or if I can inspect another player. I could Google it, but that’s cheating.

Performance wise the game hasn’t been running too bad, my PC is decent enough (awesome 3 years ago) and occasionally when things are crazy the game chugs. Considering how good the game looks running on the unreal engine, with solid art direction and detailed environments, it’s not too bad. For instance twice when I’ve been going nuts on mini-bosses I’ve ended up swinging myself upwards and into the air. Either this is a targeting issue or the games having trouble keeping up. I’ve chosen the two-handed weapon option so it could be an issue with that set, or it’s just me. But it was a little frustrating when I’m about to kill a boss, then all of a sudden I’m in the air off target (cue keyboard hulk smash). However later on I was forgiving this bad glitch, as I found a new entertaining one, which all worked in my favour. After playing some PvP as batman I was left with all he’s moves on my hotbar, this resulted in being able to one-shot players/mobs. I was also left with the same amount of HP,  what do you think I did? I went straight to the heroes spawn point in Gotham and unleashed hell. I’m pretty sure I started all out war, but it was worth it while it lasted, obviously I’ve neglected to report this bug to SOE yet. Hopefully it happens again, it was very satisfying. 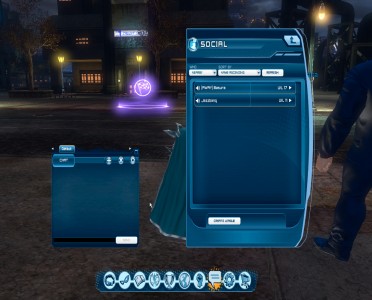 "Much like your first GF, it looks pretty, but looks can be deceiving"

The first 10 levels have definitely been enjoyable, and DCUO has a vibrant charm to the world, a certain something that sucks you in. You’ll notice I didn’t go into too much depth about trees or the way you level skills, that’s because it opens up at level 10 when class powers come into play. It’s being saved for next time, along with PS3 testing, PS3 control plugged into PC testing and much more! Do yourself a favour if you’re a Playstation Plus subscriber, download the BETA and play this fun filled game. I just hope they’ve fixed the crashing. If you’re already playing it on the PC, let us know down the bottom.

Don’t have Playstation Plus? No worries, we’ve got you covered. For your chance to win a PS3 Beta Key for Christmas, post a comment below with your heroes/villains name and why you’d choose that particular name. I’ll pick the weiner… ahh winner before Christmas.