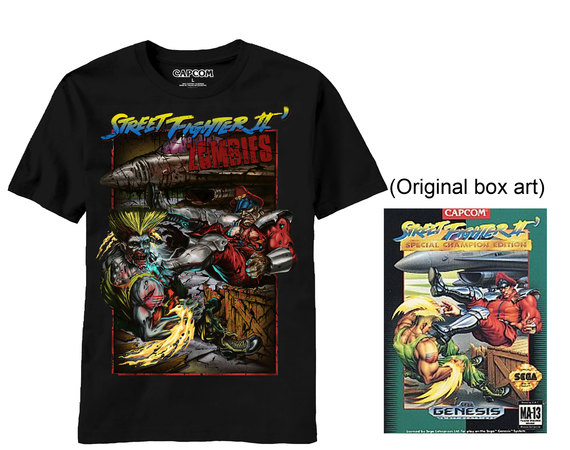 Capcom love their Zombies, we’ve seen them in Malls, in Racoon City, in Casino’s even on toast…. Hmm BRAINS !!! So what next … Well Capcom have announced a new Street Fighter II Zombies T-Shirt -YES you heard that right !! As you can see from the box art image on the right the original Street Fighter II for the Sega Genesis – Bison laying the smack down on Guile who’s about to unleash a Sonic BOOM.  On the left we see the Zombie version – Guile looking like he’s just injected himself with about seven T-Viruses and still trying to get that Sonic BOOM out which won’t make it in time as Bison who looks like could rip a Tyrant in half is about slice of Guile’s rotting head clean off !!.  Yes looks and sounds a little gory but hey – this is what you get when you ask for Zombies.  I gotta say Street Fighter and zombies go together like Blanka and bad breath.

This shirt is available right now at Hot Topic.  If you manage to pick one up lets us know – take a picture of you wearing it and we’ll throw you at the bottom of this article, PLUS you might win yourself a PRIZE !!