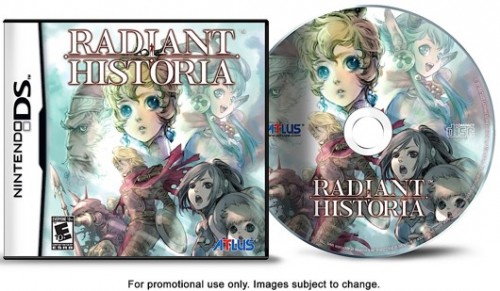 While Radiant Historia has already been seen on shelves in Japan, the rest of us are sitting and waiting for another great RPG for the DS to hopefully make its way across the seas. Thankfully we won’t be waiting in the dark anymore as we have a relative release date now from Atlus. Because today Atlus USA announced that Radiant Historia will be released on February 22nd 2011. Which means we have around four months of waiting to do. Compared to how long some localizations take, this is great news.

But for those who do not know what Radiant Historia is even about, we have a little bit of information for you. In the game you control Special Intelligence Agent Stock who uses a magical book called the White Chronicle that allows him to travel through time to alter history and prevent the destruction of the world. The game will be sporting a gridlike battle system where players can create combination attacks depending on their move order and where the enemies are located. But beyond the fighting, there are multiple endings too depending on what the player decides to change in his travels through time.

That isn’t all though because Atlus will also be releasing a music CD that will include the game’s original soundtrack including music from composer Yoko Shimomura as a bonus for those who buy the game. Catch the full trailer for the game below.

Knights in a Nightmare coming to the PSP via Atlus