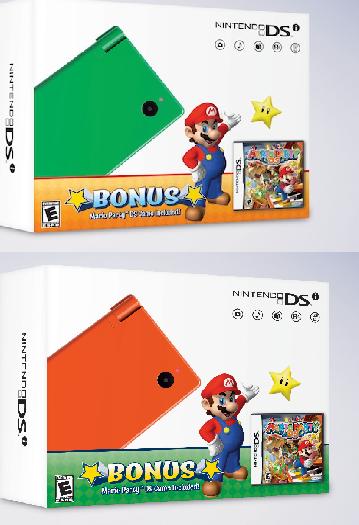 Remember a while back we told you about the two new colors that leaked out black Friday ads out of Sears? Well Nintendo is just now ready to announce that these colors are officially launching in the U.S. for Black Friday and will be available “while supplies last”. The orange (which I mistook as red) and green DSi systems will both come bundled with Mario Party and join the line along with the other releases such as the new Red DSi XL and Wii which were launched in support of Mario’s 25 anniversary.

For those who are obsessive about having a better color for their DSi or just have not upgraded yet, this price-point is a perfect excuse and you even get Mario Party as a free bonus. I am a bit curious if any more colors will be launching before the 3DS debuts next year, like maybe a matte DSi XL, but I guess we will just have to wait and see what Nintendo has next for consumers out there.For more information about Nintendo DSi, visit http://www.nintendodsi.com.