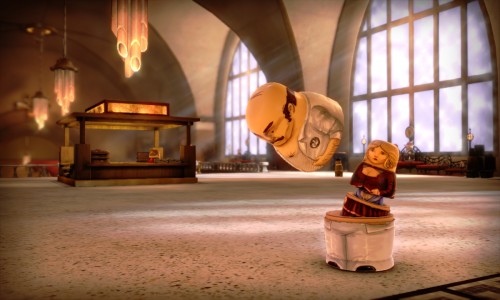 Ah, Double Fine, your wacky inspired ideas keep on coming and we keep on loving them.  Their next adventure lets you take on the role of a a very small  Russian nesting doll named Charlie Blackmore.  He has been separated from his family and he needs to reunite.  How does one tiny matryoshka make his way across a dangerous world?  By hopping into other dolls and taking them over of course.  If that sounds strange, it is.  It is also very unique and, quite frankly, awesome.

One way that Double Fine plans to change up the game is that puzzles can solved in various ways with different options.  In the trailer below, you can woo a guard using a lady doll, or you could sneak past him with a different doll.  One other original feature in the game is the ability to keep stacking different dolls on top of yourself.  You will only be able to use the outermost doll’s “powers” but you can unstack and restack to get the doll you want.  Look for Stacking to hit on XBLA and PSN in 2011.

Martin Good, Executive Vice President, THQ Kids, Family, Casual Games, and Global Online Services said,“Stacking is distinctive in its overall cinematic look as well as its approach to puzzle solving, and we believe the game will appeal to both the casual and hardcore video game player.  We are pleased to expand our library of digital download offerings and do so with high-quality games from the wonderfully creative team at Double Fine Productions.”

Double Fine Productions founder and CEO Tim Schafer says, “We’re really excited to be doing another game with THQ, building on the success we had with Costume Quest, and delivering another great adventure told in an entirely new way. What Lee has created with Stacking is something truly awesome – a game with a great story and puzzles, and a completely fresh method for interacting with them both.”