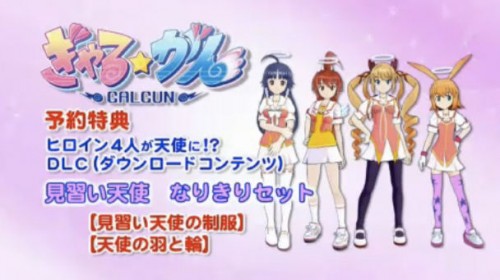 Only in Japan. Gal Gun is a railshooter style game that involves a male character being shot with Cupid’s arrow, which means that every girl that sees him instantly falls in love. What the objective of the game is to find your true love, and avoid all the girls affected by the spell by apparently shooting them with your pheremones. Bit odd of course.

Though there looks to be some problem in the world of Gal Gun. Andriasang has reported that the countdown that had been going on their official website has stopped. With an original release date of January 27th the game has run into some problems with Microsoft. Being a Xbox 360 exclusive Microsoft has some say about what will be happening within the game, and they have some qualms about the contents it appears.

The publisher Alchemist stated that, “Negotiations have started for the great moral cause (panties),” translated via Andriasang. This means that for some reason or another, Microsoft is concerned with the content. Though a game that contains a panic button that changes it to look like an 8-bit RPG game may have a few troubles already huh? A video preview can be seen below, though gotta admit it would be interesting to see this game with the Kinect huh?