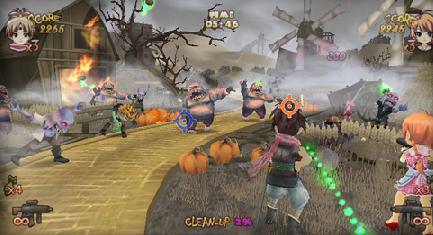 Akaoni Studio’s popular arcade shooter shouldn’t need a very big introduction for Nintendo Wii owners as since it’s release, the WiiWare title has hit #1 on the charts and gained high acclaim from gamers and reviewers alike. Those who were on the fence about shelling out the 1000 points in Europe are now in luck as a demo is on it’s way to the WiiWare, but for a limited time only.

Starting Friday, players can dive into the role of Momotoro, Snow White, or Dorothy to protect Wonderland from hordes of zombies. As I mentioned, this demo will only be available in Europe at the moment and just for a limited time. Check out the trailer below to get a look at the action for yourself of this unique shooter for the WiiWare.