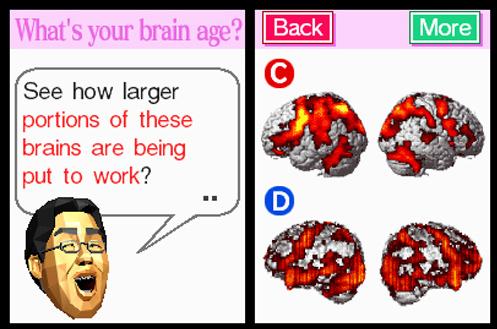 One thing in the gaming world that has baffled me was the huge success and disappearance of the Brain Age series on the Nintendo DS. Well, let me rephrase that, the games are great, but what I mean is that after selling over 33 million units the series sort of just packed up and called it a day besides a few trickles of DSiWare over the past few years. There have been countless clones and knock-offs since the release of Brain Age 2, but it is now looking that an official sequel is on it’s way.

Professor Ryuta Kawashima, you know, the floating head that scares knowledge into player in the Brain Age series has confirmed that a new game is on the way under the name “Farewell Brain Games”. Adding to this speculation of what console the game might be for, Japanese gaming  journalist Hiroki Tachibana recently posted an article mentioning that it looks like the 3DS will be getting what appears to be the finale in the series. Not much else is known, but we will keep you updated if anymore information comes forward. I for one wouldn’t mind being compared to an 88 year old man again, and in 3D no less, but it looks like we have a bit of a wait before then.