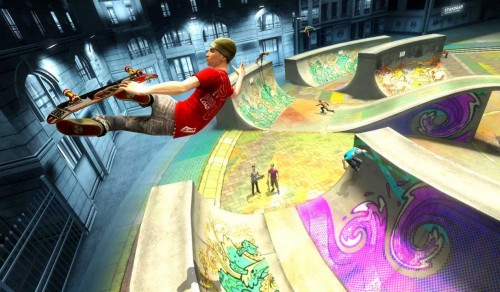 Tomatoes are amazing.  Tomato based meals like pizza and spaghetti can also be enjoyed with friends. So what happens when a flying tomato, aka Shaun White, decides to make a video game and let you share it with friends? Worlds grow bright, cheery and full of skateboarding opportunities.  You don’t believe me? Check it out!  Who knew tomatoes could be so awesome? 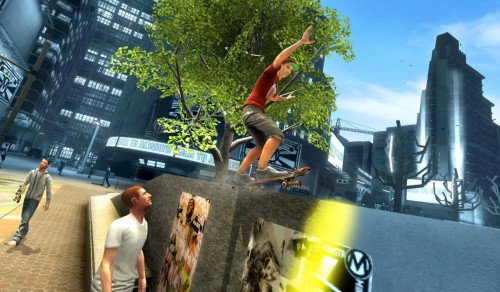 Shaun White Skateboarding will enable you and 7 friends to skate four maps in four different multiplayer modes.  Two player split screen will be provided.  Voice chat and the ability to play as your custom character from the campaign will be included.  The four multiplayer modes are as follows:

Go with the Flow

Go with the Flow is a free for all gametype that requires you to get the the highest flow score.  I’m guessing that is similar to the “line” mechanic in SKATE.  Form shaping* is allowed in this mode.

Shaping Battle is all about making as many shapes as possible.  First though, a player must obtain the shaping power or steal it from someone.

Ministry vs. the Rising

The goal in Ministry vs. the Rising is to convert the highest number of people to your side.  In case you were not aware, the story in this game tells about you, the Rising, freeing the city from the Ministry, a group of officials who think skateboarding (and most likely video games as well) will corrupt you.  This team based mode splits your group up into a team of the Rising and the Ministry.  Each side must try to either influence the city or “deinfluence” the city by doing cool tricks.

Free skate is the last mode, but that is pretty self explanatory.  I am looking forward to this game.  Hopefully it can do something original and exciting with skateboarding in video games.

*Form shaping is a unique game play mechanic in Shaun White Skateboarding.  Each player can change the world around them by skating on an object and pressing a button.  For example, a rail can be shaped and extended to reach rooftops.  Or a fountain can be shaped into a half pipe. 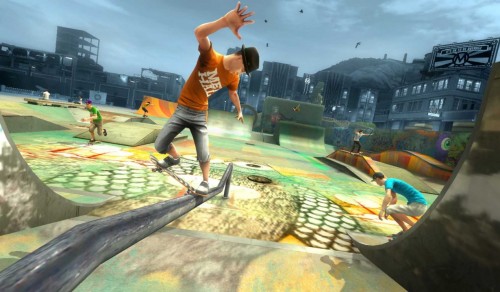