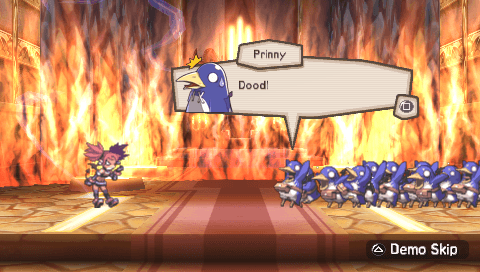 The prinnies are back yet again with their own game focusing just around them, dood. Though being titled Prinny 2: Dawn of Operation Panties, Dood! may make the ESRB a little worried and fans of the series concerned it will receive an unfair rating but there is no reason to worry. The ESRB has come through today with a T rating of Language, Mild Fantasy Violence, and Suggestive themes.

You can catch the full rating below which deserves a reading because it is quite hilarious:

“This is a side-scrolling action game in which players assume the role of penguin-like demons on a whimsical quest to retrieve stolen underpants. Players use “cartoony” swords, bombs, and flamethrowers to battle a variety of small creatures (e.g., gargoyles, scarecrows, demons, animal-like characters); enemies disappear in flashes of light when defeated.

Dialogue frequently mentions “perverts” or “pervs,” and characters make numerous comments about the stolen “panties” (e.g., “[W]ouldn’t it be great if sniffing them did destroy the Netherworld?” and “If some perv wears it over his head and takes a whiff of it . . .”). Some dialogue references the body proportions of various female characters (e.g., “Girls with something to grab onto are so much better, like pork loins” and “That flat-chested demon can’t even come close to comparing with her!”). The words “sh*t,” “a*s,” and “bastard” also appear in dialogue.”

Prinny 2 will be arriving on shelves in the US in January 2011. The game itself will be coming with a small side game on the UMD called Asagi Wars. You can also catch the trailer for Prinny 2 below dood: