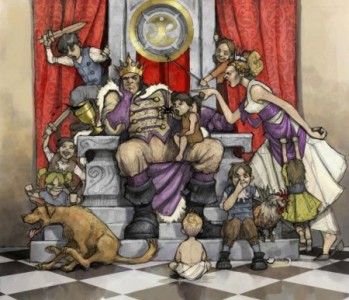 So, Fable 3 hit stores this week.  I’m just going to get down to the nitty-gritty, and just as a forewarning, there may/may not be spoilers in here.  Read at your own risk, some may not care, but I know a handful of people who want to know absolutely nothing about this game before they play it so as to not ruin the experience.  If you are one of these people, look away.

A few basic tidbits of knowledge,

– There are things in this game that have been left purposefully out until later added as DLC.  An example is the dye’s, there are 4 dyes that are not in the game yet but will be released later for 80 MS points, there are several other things in the game that aren’t in yet.  So, if you see a door that needs a key but have already 100% the game, fret not, that is for future DLC.

– You CANNOT get all of the weapons by yourself, in fact you can’t even open a demon door by your lonesome.  Fable 3 sports a new and improved coop system this time around.  As such, they want you to use this feature.  Each player has different assortments of weapons available in their game.  Because of this mechanic, most chests are randomized as to what you will obtain.  If you and your friend are both at the same spot in your games and you get weapon X from a chest, they may get weapon Y.

– Tiered loot.  The concept of tiered loot in this game means that certain chests, while still random, have certain weapons.  For example, the chest in your sanctuary at the back end of you treasury contains the highest tier.  Regardless of the weapon you get, that weapon will be the most powerful of its class (hammer/sword/pistol/rifle)

– Money is VERY important.  If you played Fable 2 extensively, you likely know about the money exploit.  The game had it so that you earned money based on your real estate every 5 minutes or so, even if the console is turned off.  You could simply disconnect from XBL, adjust the date to your choosing and rake in the cash.  This is not so this go around, as money plays a much bigger role in the game and its story.  Make sure you start buying real estate as early as possible to start amassing your fortune.  *Spoiler alert* by the end of the game, you will require several million (I think about 10 million, am probably wrong though)

Now for the tips/tricks part,

– Duping to amass your millions. Now, the more devious of you may scoff at the fact that Lionhead took out the easily exploitable money trick from Fable 2 and just figure you can “dupe” your gold by trading with a friend and then disconnecting without saving.  Normally, yes, this is how dupes are done with any game that allows trading between players.  HOWEVER, after each trade the game automatically saves, effectively stopping this little endeavor of yours.  Let me tell you that if you intend on being fully good, it is VERY hard and time consuming to get the required amount of gold by the end of the game, unless you don’t mind failure and getting the bad ending.

Luckily though, there is a way to dupe that Lionhead either didn’t anticipate or simply can’t stop.  This requires two people (obviously) and at least one flash drive or external memory.  Transfer your Fable 3 save data (should be called Hero 1 or something like that) to the external memory.  When you boot up the game, choose to save to the external memory, obviously.  Go initiate a trade with somebody so it brings up the sanctuary trading room, and then unplug your external memory unit.  The game will pause for a second and ask you if you want to quit or continue without saving, you are going to select continue without saving.  Then proceed to trade away all of your cash to your friend.  Once you are done, simply quit out to the dashboard without saving or anything.  Your friend now has the equivalent of all of your money, and you still get to keep your stash because your save is on the external memory that you unplugged.  There you have it, duping in Fable 3.

– Getting Elise as your girlfriend. Save your Elise in the beginning of the game, your decision has no real moral consequence on the game and if you sacrifice her, you lose out on being able to have her as a wife. (some may care because she is a unique character as opposed to any generic character you may find throughout the game for your wife)

– Save your seals for the big three. Don’t waste your seals on the jobs or spells (spells, not so much because everybody has their own preference).  Get the expression/dye packs because they only cost 5/10 seals which is nothing, but definitely don’t buy every job as you come across it.  You can just buy the last level of the job later on, saving you hundreds of seals by not having purchased the previous iterations first.  Doing this will leave you some wiggle room in being able to afford leveling up your melee/ranged/magic.  The jobs are only a quick way of making a LITTLE money.  The vast amount of the money you make will be from real estate.

– Do sidequests early. Some sidequests open up other quests or have follow up quests.  One area even evolves and grows based on the amount of time that passes after you open it up, so do your sidequests early to make sure you don’t inadvertently miss out on seals you could have gotten earlier.

So, there you have it.  I hope this aids some of you in your never ending quests to raise an imaginary number next to your gamertags.  Happy questing.  🙂