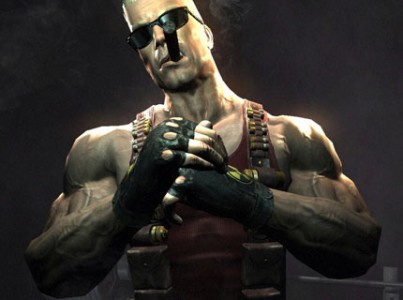 Duke Nukem. If you were born after 1992 then chances are you really don’t know much about Duke Nukem. Sure, you may say you’ve played the games, you may say you’ve heard the name, but Duke Nukem is really a character you needed to be there from the beginning to appreciate. Gearbox recently revealed that they were taking control over the “long-in-development” Duke Nukem Forever, and when I say long-in-development, I’m talking 13 years of development Hell. They’ve taken on the Duke, and they showed what he’s made of, and maybe now they’re actually going to release this game.

But let’s talk a little about Duke Nukem for a minute, who exactly is he? A big-tough action movie parody on the surface. Sure, that’s good for a couple laughs. His games are standard first person shooters, those are popular, seems like a fun game. But what about who he was in his time? Like Captain America, Duke Nukem just woke up after 13 years in suspended animation that now it might seem like he’s irrelevant.

I remember being about seven years old and playing Duke Nukem 3D over a friends house and thinking “wow this game is CRAZY” simply because it was the first, hell, probably the only game at the time that glorified violence, catch phrases, curse words, strippers, gambling, all your favorite sins. At the time most kids were playing Sonic, Mario, Final Fantasy, Legend of Zelda, all these games that were family friendly. Of course, there was Mortal Kombat and Doom, but they weren’t as human as Duke Nukem. The Duke was different, he was the cool guy we all wanted to be, we all looked up to him.

These days, kids look at Duke and think “oh, another generic video game character, probably a tough guy, his games are probably first person shooters, alright that’s cool I guess”, but back in the day, we were going nuts over Duke because the things he was doing, the things he was saying, none of that had been done in video games at the time. And don’t let me forget to mention, the gameplay was off the wall too!

Trust me, this article isn’t just a trip down memory lane, but also a look to the future. Duke Nukem Forever is finally being released, but not in the same market it was originally intended for. When Duke Nukem was first supposed to come out, games like Halo and Gears of War were still little baby ideas, good ol’ Uncle Duke was supposed to usher in the current generation of First Person Shooters. Well he missed his plane, and Master Chief wound up carrying the torch on that one. Now today, almost every game that comes out is a First Person Shooter that resembles something else that’s out, and almost all of them took their core gameplay values from Duke.

To release a Duke Nukem game today in a sea of games that took what they know from the Duke, what do they think will happen? The original Duke Nukem’s relied on humor and shock value as the icing on the delicious cake that was great gameplay, but now almost every game has the same gameplay, almost every game has the humor and shock value. What will separate Duke Nukem Forever from the Halos and the Gears of Wars?

From all the previews I’ve seen the humor was upped ten-fold, the action was upped ten-fold, hell, there’s even a button mapped for BEER. Most games use their buttons wisely, utilizing them for something important like “switching weapons”. Not Duke. He uses his buttons for beer. But will this be enough? Will Gearbox be able to polish this game enough to the point where it’ll be relevant in today’s video game world? Duke’s former glory is all but a memory now, we can never go back to the days where the M rating was given out to only 5 games a year, but I’m sure Duke Nukem Forever will be able to usher in a new era of Duke. He won’t reclaim his throne, but instead erect a newer, bigger, more bad-ass one than the one that was robbed from him.