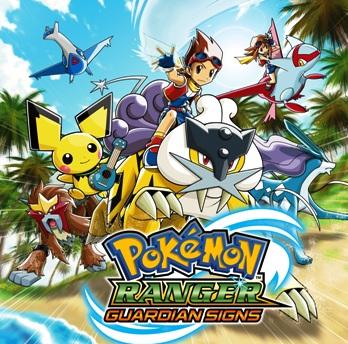 Pokemon is a huge franchise that has no doubt has had some very successful spin-off titles. Among the many out there is the Pokemon Ranger series for the Nintendo DS. Nintendo have now announced the date that the brand new title, Pokemon Ranger: Guardian Signs will be launching as well as quite a bit more info. Here is a bit of the official press release to fill you in on what to expect:

Take on the role of a Pokémon Ranger tasked with protecting the local people and wild Pokémon from the nasty Pokémon Pinchers with the help of your partner, Ukulele Pichu. To save the land from the powers of darkness, join forces with the Legendary Pokémon and stop the Pokémon Pinchers from their evil plans!

Capture and befriend Pokémon by circling them with the Capture Styler on the Nintendo DS Touch Screen. Pokémon that you befriend will support you on your adventure by using their abilities to clear obstacles that stand in your way or by helping you capture even stronger Pokémon. For the first time in the series, you can call Pokémon to your aid by drawing their Ranger Sign on the Nintendo DS Touch Screen. There are many Pokémon available to support you, as well as a number of Legendary Pokémon, including Raikou, Entei and Suicune.

As a Pokémon Ranger, your day will often involve being sent on a Mission, which may involve finding a missing person, stopping a natural disaster, or protecting the peace in another dramatic way. If you are successful and complete the Mission, then the game story will advance. Each chapter in the game features a series of dynamic tasks and puzzle-solving challenges using the powers of the Pokémon. For example, you may call upon a Pokémon in the Water-group to help put out a fire.

You can also enjoy the Wireless Multiplayer Missions with up to three other Pokémon Rangers by using the Nintendo DS Local Wireless Connection. From 5th November two Special Missions, “Protect the Blue Sphere” and “Deoxys and the Odd Temple” will be available for a limited time via the Nintendo Wi-Fi Connection. Take on the Special Mission “Deoxys and the Odd Temple” with friends via the Local Wireless Connection and once cleared send Deoxys to your copy of Pokémon Diamond Version, Pokémon Pearl Version, Pokémon Platinum Version, Pokémon HeartGold Version or Pokémon SoulSilver Version.

For those like myself who have been needing a good game to play while I wait for the new Pokemon Black & White to release in the States, Guardian Signs seems to be the perfect choice. You even finally are allowed to obtain Deoxys as well which will be be a reason for a pick-up for any Pokefan who wants to complete their Pokedex. Pokemon Guardian Signs launches October 4th in the U.S and November 5th in Europe for the Nintendo DS. Check out the trailer below.