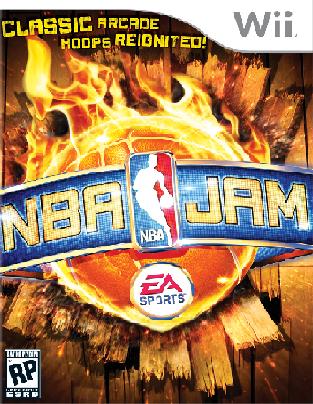 BOOM SHAKA LAKA! Can you believe the once rumored NBA Jam is now nearly upon us? EA has now released more screenshots, a nice new boxart for the Wii version (shown above), and a production diary for the game which releases next month for the Nintendo Wii. The production diary sheds light on the quality and extensive editing that went into the game to make it fresh yet keep the feel of the original titles. The video also covers how responsive the Wii controls will be now that the game will be getting the motion control treatment. I still remember the hours I put in to NBA Jam, tearing up nets and the excitement of throwing the flaming ball in the hoop at the last second.

From everything I have seen so far, the new entries produced by EA are looking awesome and capturing that same charm that made the games so popular over 15 years ago when NBA Jam was first released. Check out the Production Diary Below as well as a handful of new screenshots. To keep even more up to date on the latest happenings you can also check out the official facebook page here. NBA Jam brings the fire to the Wii on October 5th and to the PSN and Xbox Live Arcade on the same date.