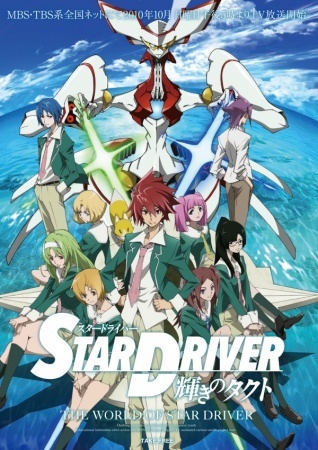 Taking an original idea and creating an anime out of it can sometimes be extremely difficult. It is very easy to make an anime after seeing the success of the manga, or of the light novel of the same story. But here we have animation studio BONES taking up the pen to give us Star Driver Kagayaki no Takuto. This anime is best considered an action mecha, but that would be taking it too easily.

The storyline involves Tsunashi Takuto who has washed up on Southern Cross Island which is the home to giant robots called “Cybody” These robots are only available to be used when unsealed by watchful shrine maidens and used in a cyber space called Zero Time. However there an organization named “Kiraboshi Juuji Dan is set on bringing the Cybody robots into the real world and use them to take over the world. Inside of Takuto’s own school there are members of this evil organization, and Takuto must do his best to try and stop these people from succeeding in their plan.

What interests me on this anime especially is that BONES has designed the giant robots with a different look than your standard humanoid appearing robots and the fact that people are not who they seem around the protagonist. Though this is usually the case in action shows, the way that it looks to be treated within Star Driver is very intriguing and I’m looking forward to seeing how BONE’s first attempt at an original story will turn out.