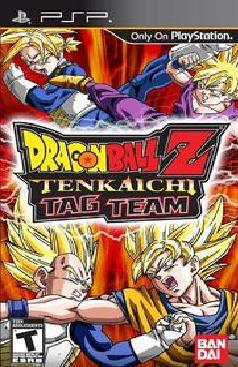 As a fan of the Dragonball series and a huge fan of the Tenkaichi titles that were released, Namco-Bandai’s latest PSP entry Dragon Ball Z: Tenkaichi Tag Team is definitely on my radar. Here is a snippet of the press release to fill you in on some of the features and modes included in the title:

For the first time ever Dragon Ball Z fans can enter into high-impact two vs. two combat in Dragon Ball Z: Tenkaichi Tag Team for the PSP system. Play solo or team up via Ad Hoc mode to tackle memorable battles in a variety of single player and multiplayer modes, including Dragon Walker, Battle 100, and Survival Mode. Dragon Walker Mode takes fans through the entire epic Dragon Ball Z story arc from the Saiyan saga to the Majin Buu saga. Battle 100 Mode tasks players to relive the most epic encounters and newly created situations from the Dragon Ball Z world in ever increasingly difficult situations. With more than 70 playable and deeply customizable characters, multiple modes, and Ad Hoc Party gameplay, Dragon Ball Z: Tenkaichi Tag Team is chock full of gameplay for your portable PSP system

The demo is now available for download via the PSN and features two selectable stages and six featured characters, including Goku, Vegeta, Picollo, Krillin, Android 19, and Dr. Gero. With all the content in the demo alone should hold over any DBZ fan until the October 19th release of Dragon Ball Z: Tenkaichi Tag Team.

Tales of Graces expands to PS3 and new Tales for PSP