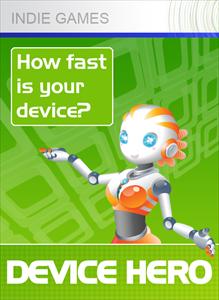 More of an Xbox Live Indie App, rather than an Xbox Live Indie Game, Device Hero lets you put your Xbox to the test as it undergoes a trial to see the processing power it possesses. The result is measured is ms, and it couldn’t be simpler to initiate. You simply press the A button to start the test which lasts only a short while, until you are finally presented with your results. From here, you can then compare results with friends who also own Device Hero (with the lowest score being the best), and settle once and for all who has the fastest HDD.

As you can see from the screenshots on the download link, Device Hero has a simple but attractive interface. Some may argue the 240 Microsoft Point price tag is a little pricey, which is a perfectly valid point, although if you do want to see what your Xbox 360 and HDD are capable of then this is the XBLIG for you.