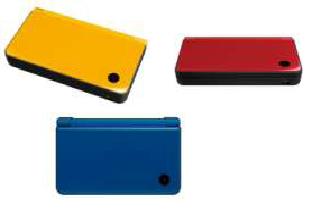 One upgrade I have been extremely pleased with so far this year was when I got the new Midnight Blue DSi XL. The screens contrary to popular belief truly make every game feel like new again and the picture is crystal clear and vivid. Those in Australia and New Zealand who have been waiting for a new color of the unit can now rejoice as Nintendo has now announced three new colors to go with the Burgundy and Bronze models already available. The new colors as seen in the picutre above will be Yellow, Red and Blue. I am personally liking the yellow as we really haven’t seen the DS yellow before. No announcement has been officially made for the U.S. as of yet but I would expect Nintendo of America to follow suit with the Red and Yellow models soon enough as a Midnight Blue model was released earlier this summer. Fans of the handheld can now get ready these brand new color schemes that will be hitting stores on September 23rd.