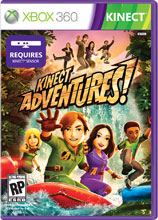 So we’ve already seen the price range that the Kinect will cost in America. Now Master Abbott can play the Kinect as well finally! However it will be at an elevated price tag. Because the Kinect package itself which does include the Kinect Adventures game, will run at $199.00 Australian.

There is also a bundle being released for Australian released which will include the brand new Slim Xbox 360, a 4GB internal memory, the Kinect Adventures game, and the Kinect itself will run the price tag of $449.00 Australian. The fact that there is still some type of internal memory is a nice tough for this cheaper version, however anyone who owns a 360 knows that 4GB is barely enough to contain your own saved data after a certain period of time.