MasterAbbott recently sat down with the Phoenix Online Game Development team, the creators of the soon to be released, highly anticipated, long awaited sequel :  King’s Quest : The Silver Lining that will be released and available to download for FREE on the 11th of July from the Kings Quest The Silver Lining Official Website 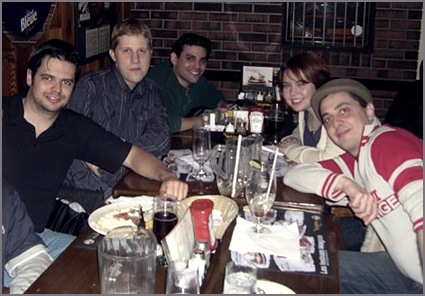 Katie Hallahan and Cesar Bittar, the Project Director and Producer, were kind enough to go through the answers are below.

Question 1 – Tell us a little bit about Phoenix Online Studios. How were they created, the origin behind the name, when was it first established, and how many employees does it have today.

Phoenix Online Studios started as a group of fans that came together to bring closure to King’s Quest. Originally known as Phoenix Freeware Online, it became Phoenix Online Studios in 2004. The name had its origin on the mythological creature and what this represents: A revival. We couldn’t have picked a better name, as we keep coming back from the dead!

Currently we have a core team of about 10-15 developers. We are looking into establishing in an office in Sacramento, California, and we are working with some people on seeking funding to make that happen.

Question 2 – Do Phoenix Online Studios create games on all the major platforms? Is development of games done in-house ? How many software developers are employed?

We are currently only doing PC, but we want to expand to the consoles as we take on our commercial projects. Development is done “in house” by our team of individuals spread out across the world who contribute to the project via the internet.

Recently we have been in talks with a company in India who is interested in expanding into game development. Such a partnership would allow us to develop faster content to keep up with our planned episodic games and meshes well with the international dynamic Phoenix Online already employs.

Question 3 – What do you believe have been Phoenix Online’s greatest challenges designing games on all the platforms you currently cover?

Right now, our biggest challenge is being spread all over the globe with different schedules. Luckily there are many tools at our disposal these days to create an office environment remotely and keep in continuous contact.

Time zones however continue to be a problem so we want to establish a head office, have key members work in the same place, and have an unified schedule which will allow us to keep up with our milestones. We have the basics of development, now we have to take that next step and become a proper established company with physical offices.

Question 4 – Run us through the how long it took to develop King’s Quest The Silver Lining and if possible could you give us a little rundown on what it’s about and on what platform(s) it will be released on.

The Silver Lining is the spiritual successor to the legendary King’s Quest series, first brought into the market by Sierra Online in 1984. We wanted to bring closure to the series and so we came together to make a game that we considered could be a great successor to the games that formed part of our childhood.

It’s taken us 8 years to finish The Silver Lining. For us, this was a learning experience on how to make a great game. This game is also a labor of love and as such, people work on it on their free time. However, we didn’t want to sacrifice the quality of the product because of this and so we extended development times. We also kept pushing the envelope, because we wanted this to be a great successor to the games we loved.

We are using the Torque Engine from GarageGames, which, althought we had to modify in order to make it work for an adventure game (it was designed for FPS), has proven to be a very robust engine, with a great support, and great accessibility for indie developers. We are very happy with it and will definitely consider using its future incarnations for our next products. We are currently looking at Torque 3D for our next project: Corridor 9.

Question 6 – For new players not aware of The King’s Quest Series. What sort and style of game is it ? Please explain in as much detail as possible it’s background and history and where The Silver Lining fits into all of this.

King’s Quest was one of Sierra On-line’s flagship franchises in the 80’s and 90’s, and at the forefront of adventure games. It is also one of the most well-known series to use the point-and-click interface, with the five classic icons for look, touch, speak, walk, and use. The games followed the adventures of the Royal Family of Daventry over a course of about 25 years or so, from such things as adventuring to save Daventry and become crowned king, to rescuing fair maidens in towers, to escaping and defeating evil wizards and other kingdoms altogether. They were fun, family-friendly games that drew a lot on mythology and fairy tales for their source material. Our game, The Silver Lining, takes place about a year after the eighth and last game, Mask of Eternity–King Graham, ruler of Daventry, is now questing to cure his twin children, Rosella and Alexander, from an evil curse they are under. However, as he does so, he begins to learn that there have been greater forces–and more sinister ones–at work in his family’s past and present, and the threat they face is much bigger than he suspected.

Question 7 – Will King’s Quest The Silver Lining be suitable for players of all ages ?

Though the game is a little darker than the previous King’s Quest games, and delves deeper into the characters, we did want to keep that tradition of a game for all ages. It’s a family-friendly game, and while some parts may be scary to a very young player, those are few and far between. The spirit of the adventure and fun from the earlier games is very much still there.

Question 8 – What were the development teams inspirations behind creating King’s Quest The Silver Lining ? What other games have played a major role (past and present) in shaping and creating this game and also moulding Phoenix Online Studios.

Obviously, the King’s Quest series was our biggest inspiration! Without that, there wouldn’t be a game at all! But modern games have played a role as well. We made this game much more cinematic than the old KQ games, as well as making it fully 3D, whereas the majority of the King’s Quest series was 2D and that style is considered to represent the sort of ‘golden age’ of adventure games to a lot of fans. Some of the games we had in mind when designing it also include The Longest Journey, the Gabriel Knight series, Beyond Good and Evil and Final Fantasy.

Question 9 Has Phoenix Online been in contact with the original creator and writer of the King’s Quest series : Roberta Williams from Sierra to get ideas and story for The Silver Lining ?

Some years ago, we held a developers chat with the fans and invited Ken Williams over. Before the chat started, we asked Ken if Roberta had seen our game and if she had any feedback. Ken mentioned that Roberta never got involved with these projects because she thought that we had to walk our own path in terms of our vision for this game. However, Ken also said that as she glanced at some of the screenshots, she had to sit down take a closer look at them, and express how impressed and thankful she was.

To us, that meant the world.

Question 10 – If not what were the teams inspirations in creating the story for The Silver Lining ?

Aside from games there is the obvious Hollywood inspiration. Harry Potter and Lord of The Rings were around that time, and they were a huge inspiration when writing the story. Harry Potter especially, since that felt like a modern fairy tale to us, and it progressively got darker and darker, just as The Silver Lining does.

Question 11 – Without giving away too many spoilers what is the story behind King’s Quest The Silver Lining ?

The game begins as Graham looks for a cure for an enchantment cast on his twin children, Alexander and Rosella. However, as he delves deeper into his adventure, he soon realizes this isn’t simple saving his family again. There’s an elaborate plot beyond their knowledge, one that is tied to a prophecy that spans over a thousand years.

We are really excited to bring a more mature story to the fans. We believe times have changed, and for King’s Quest to compete in today’s marketplace, it has to step up from the more simplistic stories from the 90s. Those were amazing stories, and they created such a great following –us included!–but we think that this type of more aggressive storytelling will be better suited to today’s audience.

The episodic format is a great way to release games, especially in today’s fast environment. They allow for smaller chunks of the story to be doled out to the players at a time, and don’t require such a big investment of time upfront to be completed.

From a development standpoint it’s also great because it allows you to release content in a faster way, and to keep the team focused working on smaller portions of a game at the time.

From a consumer standpoint, it’s very convenient because not only do they get to have the product faster in their hands, but also because, just like TV shows, the downtime between episodes is much shorter and the flame can be kept alive. Instead of a few years between one installment and the next, you only have to wait a month or two! And your enjoyment of that game is stretched out over a longer period as well. You get to experience it for longer.

Question 13 – Once King’s Quest The Silver Lining is completed, What can fans and consumer expect to see in the future in terms of new games made by Phoenix Online Games.

We definitely always look past to what a great company Sierra Online was. In our heart, the same way that Telltale has become the new “LucasArts” of adventure games, we want to become that for Sierra.

We want to move forward making great episodic games that engage the players through great stories, and also provide a community where the players can come to discuss with others about those games they come to love. Sierra was able to make this happen back in the 80s and 90s without the internet, so we are glad we have these new tools in our hands, and we plan to use them as much as we can.

Currently, we are working on our next game, Corridor 9. It is set in the near future after World War III, and it follows a woman, a scientist, and her team as they spend a night in an old laboratory where things are out of control. It’s a game that is based on themes of religion vs science, and man vs machine. In terms of gameplay, we are trying to do some really cool things with borrowing elements from other genres in order to create an adventure game that feels fresh and new, but at the same time without alienating classic adventure gamers.

Question 14 – Finally.. What do you love most about working at Phoenix Online Games ?

Let us know what you thought of the interview and also about the highly anticipated finale to one of the best adventures games ever made.

Singularity is officially out!