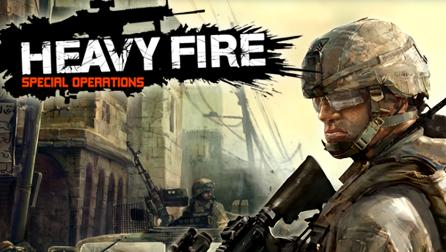 On-rail shooters have quite a history in gaming dating back to the old arcades. Even as of late in the age of home consoles, Sin & Punishment 2 and the two Resident Evil Chronicle titles were both solid additions to the Nintendo Wii’s library of games. Tenyon is ready to throw their own title into the Mix with Heavy Fire: Special operations for the Wii.

In this arcade shooter, you play through challenging missions through as a member of an elite army unit taking place in the frantic Middle East. Players will engage on ground, Humvee or Blackhawk. Heavy Fire also brings destructible environments into the mix with additional points given for the more you destroy.

The better you play the game, the more your military rank will advance leading to starting the game as a private with a well played game can lead to a promotion all the way up to Sergeant Major. Each rank is linked to one of seven in game guns, so the higher your score, the better rank you receive leading to a better gun making a much more rewarding experience. Players can also replay over and over to try to better their score to hit the top of the world’s rankings.

Heavy Fire: Special Operations comes to the WiiWare service for only 500 points. Check out the trailer to see even more of this new shooting experience.