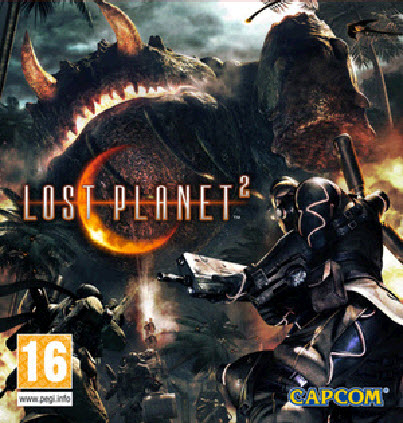 Now it is finally time for some lost planet DLC that is slightly more appetizing then those map packs we got earlier on.

‘Rush Arena’ is coming along with the ‘Post Modern’ skin. The skin allows you to dress up as a data post, and if you haven’t played the game you will have no idea what I am talking about right now. The Post Modern skin is available for multiplayer modes from the start but if you want to wear it in singleplayer you will need to beat the game first.

‘Rush Arena’ is a 4-player co-op mode that puts your team against all of the bosses within the game. I mean LITERALLY all of the bosses. (hahaha! yes, the emphasis is place wrong.) Fight the giant salamander Gordiant to the hugenormous desert Akrid and wipe your mouth with the final boss. Hmmm, what a yummy boss dinner this will be! The mode will include Leaderboard support which means BRAGGING RIGHTS! BRINg IT ON!

‘Rush Arena’ and ‘ Post Modern’ skin will be out at the end of July and will cost 240 Microsoft Points.