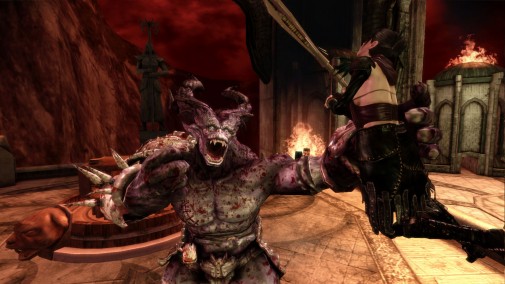 After the unexpected release of information by Xbox Live NewsBeat on the unannounced DarkSpawn Chronicles DLC for Dragon Age: Origins, Bioware themselves have established a website with information on the add-on.  And with it they have also released full details on what the DLC will include, and for only 400 msp it is quite an interesting one.

According to the website you will now be in control of the actual Darkspawn during the final battle of Ferelden, and will change history as the human race and their allies are wiped from the face of the map. Here is a list of the features which will be in the DLC;

* A look at an alternate history: what if your character had died in the Joining ceremony, and the Grey Wardens marched under Alistair’s command instead?
* A standalone adventure in which you command genlocks, hurlocks, shrieks, and even the mighty ogres.
* Complete the module and unlock an epic Darkspawn item in DA:O and Awakening.

This DLC will be a stand alone one, and will not affect anything in the gameplay itself outside of put you behind the eyes of the enemy and strike down your old party members. This is a great little piece of DLC and it definitely is interesting. At only 400 MSP ($5) it is a steal considering the price of Bioware’s previous DLC releases for the title. What does everyone think about this? Wonder exactly how they are going to factor in various choices from the game as well as what that special item is.

Dragon Age: Origins’ Darkspawn Chronicles DLC will be available on May 18th for the 360 according to Xbox Live Newsbeat, and is set to be released on the PS3 and PC as well.