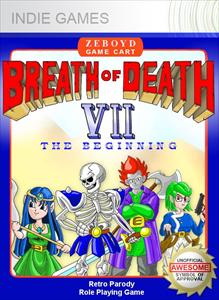 Today Zeboyd Games has released their own RPG game on the Indie Marketplace. However this is no ordinary RPG. The game itself is a parody of current games, and designed like a retro RPG of the years gone by. Breath of Death VII: The Beginning has been released on April 22nd and was created by a team of only two friends with a love for games.

One of the game designers, Robert Boyd has stated:

“We’re big fans of classic console RPGs, and have been disappointed that this style of games has largely left the home consoles for the portable systems in recent years. Thanks to Xbox Live Indie Games, we’ve been able to bring the genre back to the big screen in all its pixelated glory. Not only that, but the game is only 80 MS points ($1 USD). That’s like eighty times cheaper than what these things cost back in the day!”

With a storyline reaching upwards of six hours, and only for $1 this game is definitely worth the points. Not only that but with the many advanced RPGs coming out nowadays, we can always look back to the past and enjoy the retro games. You may purchase Breath of Death VII: The Beginning from the XBLIG Here!

Its a Podcast, Capsule Computers Style! – We want your suggestions!