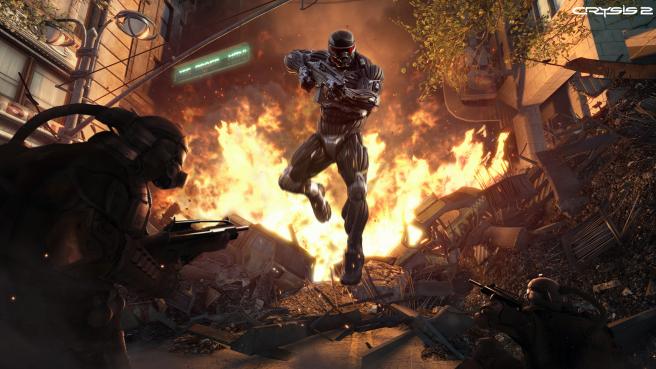 EA and Crytek GmbH today announced that Richard Morgan, award-winning author of the science-fiction bestsellers ‘Altered Carbon’ and ‘Broken Angels’, is writing the story for this holiday’s blockbuster action game, Crysis 2. Morgan is working with Crytek to bring his trademark visceral writing style to the project, which is his first entry into the video game medium.  In Crysis 2, New York is under the attack of a unique and frightening alien species that combines deadly weaponry, exceptional sensory abilities and intelligent collaboration to present players with the most challenging opponents ever seen in a first person shooter.  Surrounded by devastation, players must assess the situations they encounter, adapt to this urban jungle and use the weapons and powers given solely to them to save New York. Morgan enters this distressed world and brings it to life with gritty characters, a rich back-story and plot twists rarely found in video games.

“Video games are one of the only things in my life I would qualify as a complete addiction,” said Richard Morgan.  “The medium has every bit the potential for exciting and emotionally charged storytelling as literature and film, and I’m excited to explore this format on my first project in partnership with a world class developer like Crytek.”

“At Crytek, we pride ourselves on working with the most elite talent in the industry, and Richard is no exception,” said Cevat Yerli, CEO and President of Crytek.  “He has helped us take our ideas for Crysis 2 and transform them into a story that really engages the player in many new and exciting ways.  His passion for his craft and for games is a perfect match for our team and we can’t wait for gamers to experience this collaboration.”

In Crysis 2, the aliens have returned with a full invasion force bent on nothing less than the total annihilation of mankind. In New York, terrifying alien invaders stalk the streets and a nightmare plague strikes down the city’s myriad inhabitants with brutal epidemic speed.  The city’s systems are in chaos, its streets and skyline are smashed and in flaming ruin. Neither paramilitary law enforcement nor the might of the US military machine can stand against the invaders, and all who choose not to flee are dead men walking.  Just to survive in this maelstrom of death will require technology beyond anything any modern soldier has ever seen. One man will inherit that means to survive.  You alone must wield the combat technology of Nanosuit 2, and make the last stand to save humanity from destruction in the urban jungle that is New York City.