I don’t know how they do it but Gameloft have the knack for developing games created by other software developers on the iPhone that look and feel so similar to the originals its not funny.  So far they’ve cloned up Modern Warfare and called it Modern Combat.  Next Grand Theft Auto took a hit was remade into Gangstar West Coast Hustle,  there’s even a Warcraft 3 clone called Lost Empires and most recently even HALO was recreated and called N.O.V.A.  It’s so similar that the computer AI even looks like Cortana.

Looks like the next game to get a cloning over is Capcom’s Resident Evil 5.  Gameloft have descided to call this title Zombie Infection. Check out the images below :

Now I don’t know about you guys but it looks like this level’s been ripped right out of the early African Level of Resident Evil 5.  I’m not sure what to say.  Look at the beef handing off the hooks and the Zombie that’s about to do its Resident Evil 4 & 5 trademark sidestep. 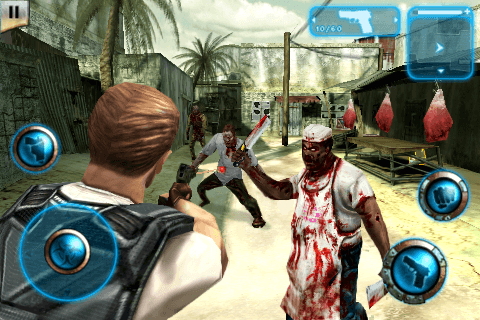 From what we’ve heard you even come across a female character that servers as your sidekick in the game by the name of Shawna ?????? Man does it get any closer to Sheva ? Well so far from what others have reported the game actually looks and feels very good and some people have gone out and said that Gameloft have actually done a better job than Capcom have done with Resident Evil 4 and Regeneration on the iPhone. 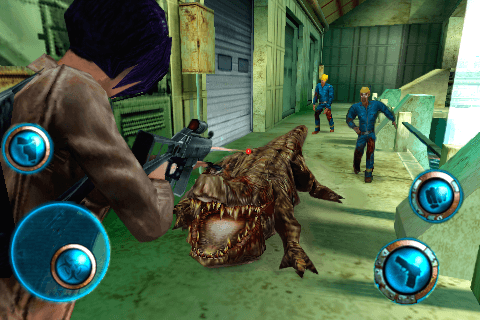 Now where I come from,  those are fighting words !! Looks like Capcom’s going to have to step up and show the world who’s boss of the Survival Horror/Zombie style games and release an Official Resident Evil 5 for the iPhone.  After seeing how brilliant the Street Fighter IV convertion was on the iPhone,  I don’t think anyone will question Capcom if they descide to bring Chris and Sheva to the portable gaming device.   Remebemer this people, no one blows holes through zombies like Chris Redfield does !! 😉

What do you guys think ?  Your comments thoughts and suggestions ?