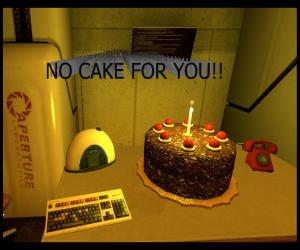 Steam had an update for the game Portal, which included a rather odd line in the patch notes which said “changed radio transmission frequency to comply with federal and state spectrum management regulations.”

This simple line caused the steam forums to buzz, and it was noted that Radios were added to each level, and secret transmissions could be heard if you carried the radio to certain locations in the level. The Morse code signals hint that Glados could’ve transmitted herself before you killed her, hinting at a Portal 2.

So, anyone working on this achievement? Or did everyone just get it on the XBox 360 like me?