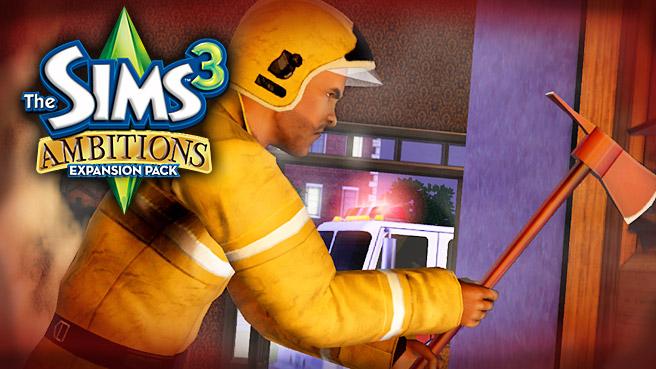 Check out the press release : Click on the link below 🙂

The EA Play Label of EA today announced that The Sims 3 Ambitions Expansion pack* is in development and will launch in June 2010. As the second expansion pack to The Sims 3, the best-selling PC game of 2009**, The Sims 3 Ambitions allows players to pursue a variety of exciting paths and careers in their Sims’ lives that in turn affect their overall gameplay experience and neighborhood. While on the job, the player has direct control over their Sims’ work and can choose how to spend their days. Players can opt to make house calls and save lives as a doctor or choose the devious route and test experimental medicine on patients, be the hero firefighter tackling raging infernos or smashing everything in sight at the victim’s home with an axe, or take a shot at solving cases as an investigator, nicely convincing sources to divulge secrets or roughing up perpetrators in a dark alley to get information.

“The variety of careers to choose from is unmatched and we’ve never given players the opportunity to follow their Sims to work and affect their actions on the job,” said Scott Evans, General Manager of The Sims Studio at EA. “The Sims 3 Ambitions changes that. Players’ actions at work now directly affect their lives, community and neighbors and become an extremely important part of how the game is played.”

Players can now experience some of the most exciting and varied jobs. In The Sims 3 Ambitions, players can choose to hunt down vengeful spirits as the ghost hunter, invent brilliant and potentially destructive gadgets as an inventor, craft glorious masterpieces as a sculptor, and solve riveting cases by any means necessary as an investigator with dozens of cases to solve and numerous clues to find. Additionally, players will be able to change the look and feel of their town by becoming an architect and directly affecting the neighborhood around them leveraging Build and Buy mode. The stylist career and new tattoo system allow players to make over their Sim neighbors in fashionable or catastrophic ways. For the first time, players will be in charge of how their Sims’ career progresses and decide if they will work for good or evil, pursue creative endeavors or technical affairs, climb to the top quickly, or be a slacker. The future of a Sims’ success or failure is entirely in the hands of the player.

The Sims 3 Ambitionswill also be available for feature phones, iPhone and iPod touch in late 2010 from EA Mobile. These versions will have customized mobile gameplay features which will be revealed in the coming months and will not require a base game to play. For information on carrier availability and pricing for all EA Mobile games, please visit EA Mobile.