MasterAbbott of Capsule Computers spoke to Com2us producer of the newly released EPIC Action RPG Chronicles Of Inotia 2 : A Wanderer Of Luone for the Apple iPhone Minyoung Jung. 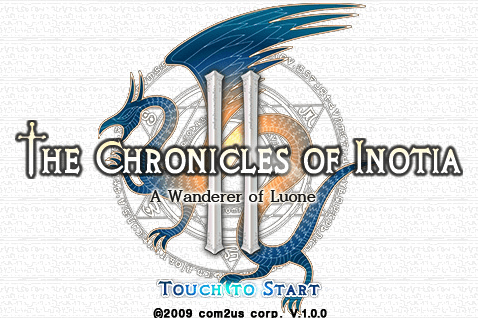 Minyoung goes through in fine detail all the new features we can expect to see in the Inotia : A Wanderer Of Luone.  Capsule Computers would like to thank Minyoung for his time in answering these questions and I hope you enjoy reading them.

Capsule Computers Question 1 – Tell us a little bit about yourself and what you have worked on in the past at Com2us.  And how long you have been working at Com2us.

Capsule Computers Question 2 – What do you believe have been your greatest challenges designing Chronicles Of Inotia 2 for the iPhone/iTouch.

Minyoung Jung  – With the success of Com2uS’ previous RPG title, The Chronicles of Inotia: Legend of Feanor, we realized that there are so many new features we could add into our sequel RPG title. However, adding these new features ended up being more complicated than we had expected. Moreover, with a relatively tight line-up for 2010, we wanted to have this game released early December 2009 so that we would have enough time to develop updates that would incorporate the voice of the customer.

Capsule Computers Question 3 – What do you believe is the main reason Chronicles Of Inotia was such a success ?

Minyoung Jung – Actually, I  was not part of The Chronicles of Inotia: Legend of Feanor.

The main success of the first title was that the App Store was still in its infant stages when this title was released. There were no well-developed RPG titles on the App Store and we were one of the first to create a fully immerse role-playing game.  With a limited API and only a handful of developers on the iPhone, we were able to provide what the market lacked, which was a graphically superb, fun RPG title. Now with a stronger platform and a well defined market, we are once again maximizing the users RPG experience on the iPhone.

Capsule Computers Question 4 –For people that don’t know anything about, Chronicles Of Inotia & Inotia 2.  How would you describe the game to them and the meaning behind the games name.

Minyoung Jung – Inotia is the name of the land that the Chronicles of Inotia series takes place.

This game is a classical RPG game with 5 unique classes to choose from.

Some of the main features are:

• Classic RPG: Over 200 Single player quests.
• Match up Mode: Endless online battles against other players on our server.
• Classes: Choose from 5 classes. Knight, Magician, Priest, Thief, Templar.
• Party System: Ally with up to 2 mercenaries which can be customized by the user.
• Look System: Change your character appearance with each new armor you equip.

Capsule Computers Question 5 – What makes Chronicles Of Inotia 2 stand out in the crowd of other RPG style games that are out in the market at the moment.

Minyoung Jung – As mentioned in the previous answer, to stand out from other RPG titles, we have added some of the following features: Match up(online) mode, 5 classes, party system, look system, and more more.

Capsule Computers Question 6 –How long was the development cycle for Chronicles Of Inotia 2.  Could you briefly explain the start to finish phases: storyboading, concept art etc

Minyoung Jung – The total development time for Inotia 2 was a little over 2 years. We took 1 year of development to release the game in the Korean market. However, due to that fact that we can add much more features to the game on the iPhone, we spent another year adding new designs, more features, and localization for the iPhone

Capsule Computers Question 7 –What engine / technology is used in getting Chronicles Of Inotia 2 up and running on the iPhone, how many developers / programmers were involved in creating it.

Minyoung Jung – There weren’t any special engines or technology that was used to make this game. Most of the special tools, such as a map authoring tool, are things that are used in most RPG development process.

It is difficult to say how many developers and designers were working on this program because we often used experts from other fields to help make this game as fine-tuned as possible. However, the  core number of people working on the project is about 11 members: one producer, 4 designers, and 6 developers. When you complete the game, you can see all the people that contributed to the game in the “Credits” section.

Capsule Computers Question 8 – Where there any issues or speed bumps along the way in creating Chronicles Of Inotia 2 ? And what did the development team do to overcome them.

Minyoung Jung – The answer to this question can be referred to answer number 2.

Capsule Computers Question 9 – What was your main reason for creating a fun and exciting RPG Sequel like Chronicles Of Inotia 2 ?  What other games if any were influential in aiding the creation of Inotia 2.

Minyoung Jung – All the members of the Inotia: A Wanderer of Luoneteam are huge fans of RPG. It is difficult to say that there was one game that helped inspire Inotia 2 because all the developers and designers enjoy playing  multiple RPG titles at one time. This is also the main reason why they were able to create a fun and exciting RPG sequel because they already know the elements to what make a role-play game fun and exciting.  All they needed to do was put their previous experiences in RPG into this one game as best they could.

Capsule Computers Question 10 –How would you describe the game mechanics of Chronicles Of Inotia 2.  What do players need to do to succeed.

Minyoung Jung – The game is a very open-ended game. We wanted to make sure that the user can try out as main different options as possible. For example, with weapon or armour enchantments, users can customize their own type of weapon; or with up to 3 members in a party, a user can play the game two or three times and still have a completely different experience each time. Therefore, there isn’t an exact formula that a player needs to do to succeed, instead we want the players to try out different things and see what works for them.

Capsule Computers Question 11 –Will there be any patches or updates planned for Chronicles Of Inotia 2, if so what will be included in the updates.

Minyoung Jung – Yes. We have planned for a minimum of two months worth of patches and updates. If we come up with even better ideas for the game, we may continue to update until we feel satisfied that all features have been added.  However, we have not yet decided what exactly will be in the updates.

Minyoung Jung – We have a total of 5 classes:

Adding more classes are currently in the middle of discussion but nothing has been finalized.

Capsule Computers Question 13 –Trophies / Achievements are what drive a number of players to play games now-days .. Does Chronicles Of Inotia 2 have goals to accomplish  or achievements to unlock.  And if not will there be any possibilities of adding them in future releases / updates.

Minyoung Jung – In Inotia: A Wanderer of Luone, just like all other RPGs, there is a story that unravels as you progress along in the game. And on your path to the end of the story, there will be multiple plot twists and amazing skills that you will learn along the way. With over 48 hours of playtime, the greatest award is finding the final piece to the epic story.

However, once the single player mission is completed, it doesn’t mean that there isn’t more to enjoy. With our online Match up mode and online ranking  system, users can slash all their competition to become the best of the best.

Capsule Computers Question 14 – How many hours of gameplay is there with Chronicles of Inotia 2  Will there be many quests and side quests for players to do ?

Minyoung Jung – If you try and rush through the game to get to the end, the entire game will take about 48 hours. However, if you would like to do all the side quests and reach the maximum level, the game time can run you over 100 hours. With over 200 quests, this game is one of the most immerse RPGs on the iPhone.

Minyoung Jung – Currently, there is a semi-networked multiplayer mode. In this “Match up mode”, users can challenge ghost players. If they pass 5 challenges in a row, they are given resources that can be used to buy special items. As far as improving the multiplayer mode, we are still discussing what can be done for future updates.

Once again Capsule Computers would like to thank Minyoung Jung for taking the time to answer these questions about Inotia 2 : A Wanderer of Luone for the Apple iPhone.  I would urge anyone with a iPhone go out and buy this today.  It’s certainly one of the best Action RPG’s on the iPhone today. If you would like to see more of the game.  Check out Capsule Computers video review of Inotia : A Wanderer Of Luone here.

Let us know what you thought of the interview and also what you think of the game, in the comments below.

We Sing Superstar Quiz available for free on App Store