G’day everyone MasterAbbot is back with another interview for Capsule Computers. 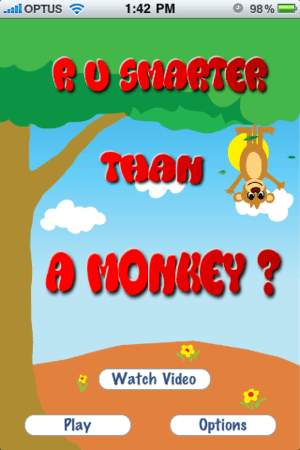 Capsule Computers Question 1 : When was Software Solutions Consulting Inc first established.  How many employees were employed at the time ? And how many employees are currently employed now ? And where are you offices located  ?

Vic & May : SSCI was established in 1995 by Vic & May, a husband and wife team, located in Charlotte, North Carolina USA, in 1995.  The two of us are still at it… no other employees.  Originally we were financial programmers on Wall St.  In 2009 we decided to explore other, non-finance related ventures.

Vic & May : The biggest challenge is really putting together all the different pieces needed to make a successful commercial product.  You need to be a programmer, artist, marketer, video editor, etc.

Capsule Computers Question 3 : Can you briefly describe what type of game R U Smarter Than A Monkey is.  And what do players need to do ?

Vic & May : The game is based on a study on monkeys and their cognitive ability reported by ABC news.  The monkeys are quicker and better at this than one might think!  The game gives you a chance to test yourself against these monkeys.

Capsule Computers Question 4 : What features/modes etc did you add to make R U Smarter Than A Monkey entertaining for players.

Vic & May : It has several levels — starting at easy level “Baby Baboon” and progressing to harder levels like “Mind the gap” so you can practice before you challenge the monkey at an insane speed!  Please make sure to try the Monkey Challenge Level and be sure to check out the web page comparing your results to others.  www.RUSmarterThanAMonkey.com.

Capsule Computers Question 5 : Where there any issues or speed bumps along the way in creating R U Smarter Than A Monkey ? And what did the development team do to overcome them.

Vic & May : The only show stopper was when Apple first rejected our App because we included a video of ABC News right in the packaging.  We had to contact ABC News to resolve the issue!  They said we couldn’t include it!  We were forced to put a link to youtube instead and that delayed our release by several weeks.

Vic & May : Originally we were suppose to work on a fantasy football app (www.fantistics.com).  When we got the dev tools we decided to do a game “real quick” to learn the Apple development platform.  The game was a bit different at first with different pieces instead of numbers.

There were many iterations in the development process.  Many hours and days of tweaking each level to make it fun and challenging.  Eg, how long should the pieces be revealed before covering?  Scoring was also a big issue because we wanted to fairly compensate for speed, accuracy and most pieces remembered.

Capsule Computers Question 7 : What makes R U Smarter Than A Monkey so entertaining, different and more challenging than other brain training games on the market at the moment.

Vic & May : It’s a unique idea.  It’s very compelling to see if you have the cognitive skill of a monkey and to improve your ability to match if not exceed the monkeys. We also offer online comparisons so you can compare yourself against other players making it even more challenging and fun.

Capsule Computers Question 8 : Tell us a little bit about the achievements in R U Smarter Than A Monkey and how you incorporated them into Open Feint.  If possible can you explain to everyone what is Open Feint.

Vic & May : OpenFeint is a system which keeps track of scoring and achievements online.  It also allows you to chat online with other players and discover other iPhone games with use the OpenFeint system.

Achievements are part of the game, for example when you can “memorize 8 pieces” you earn that achievement.   You get a popup when that happens and, optionally, you can post that to your Facebook and Twitter accounts.  Also, there is a “trophy room” screen where you can see your achievements.  There are about 30 achievements in the game.

Capsule Computers Question 9 : What inspired you to make R U Smarter Than A Monkey ? And What did you set to accomplish and have players achieve when playing this game.

Vic & May : I was pretty much inspired by my wife May.  She’s a perfectionist when it comes to software development and she’s good at it too.  I think she was inspired just because she wanted to create a game that would be simple but fun and challenging for people to play.  She really thinks that this can help people remember better.

Capsule Computers Question 10 : What can players / consumers expect from Software Solutions Consulting Inc moving forward.  Are there already plans or upcoming games that you are able to let your fans know about ?

Vic & May : We have several ideas for more games.  We’re still trying to figure out if we can recoup our costs for this game, so we’ll see.

Grab your copy now from App Store :  DOWNLOAD R U SMARTER THAN A MONKEY for only $0.99 US