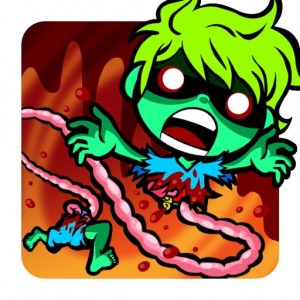 Overview:
There comes a time in every man’s life when he discovers a new way to “relax.” Now Althi Inc. plan on tapping into that market of “relaxers” with a their new “relaxation” title, Zombie Swing. A game that will help you “relax” by swinging about your little monster and infecting those it comes in contact with. If this sounds like a normal Saturday night for you, then you are sure to love Zombie Swing. 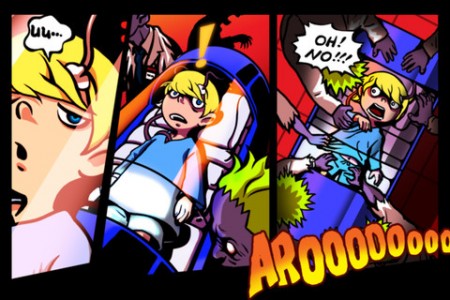 Gameplay:
It is a little difficult to take Zombie Swing entirely serious, but it is evident that Althi intended it that way. This game while being simple, does not fall into the trapping of many zombie games. That trapping that they have about as much personality as one of the brain-dead masses.

Zombie Swing manages to become something of a unique case. It is bursting with an immense amount of character, which is exactly what you’d come to expect from Althi Inc. Their titles all feature that unique personality unique to them, which is heavily influenced by the Japanese culture that surrounds Althi in their homeland.

I’m sure your wondering, how does this game even play? Well as Althi have said in their promotions for the title, “Zombie will swing, swing and SWING!” If that makes as little sense to you as it does to me, then I’ll give you a little explaination. Zombie Swing is essentially an on-the-go game, that really will not eat up a lot of time. It’s simple as iOS games come but manages to feature some deeper level of intricacy that can be easy to leave unnoticed.

You control a zombie, that has been split in half, with nothing but his intestines holding him together. You wiggle your finger about to swing him into helpless scientist, in the aim to infect as many as possible, whilst dodging obstable that can kill you… again.

It’s all rather straight forward, yet there is a certain skill required to play this game effectively. A lot of things occur simultaneously in this game. With so much going on, it can become very difficult to focus on things and you could often fall into the trap of random finger waggling. But to play this game you need to be able to play close attention, thus adding an extra level of difficulty.

In the end though, you will leave this game having fun, even if it’s not very deep fun. Afterall isn’t that really all that a game is supposed to do? 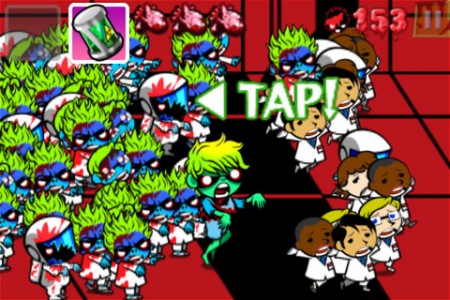 Visuals and Audio:
Zombie Swing employs a unique visual style, that really could only be done by Althi Inc. You could consider it to be Little Dreamer zombified. It oozes personality out of every orifice. It is without a doubt one of the most visually appealing iOS titles that has come out in a long time. Heck it is one of the most visually appealing zombie titles in a long time.

The presentation on display in Zombie Swing, is a little tough to pin down. On one hand it is set out well enough, but at the same time, there is often just too many things going on at one time and it can be very confusing for the player who isn’t in the mood to try and figure out where each character and obstacle are at a time. While this does let Zombie Swing down, it doesn’t ruin the experience all in all.

Unfortunately Zombie Swing does feature some rather lackluster music, which is unusual for Althi Inc. I had expected something more unique from the titlle, but instead we are subjected to generic and grating tunes, that really become irritating very quickly. 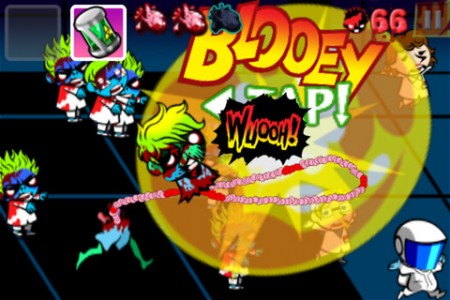 Overall:
In conclusion, Zombie Swing is a game that is just some great dumb fun. There is no real level of depth to this game and there shouldn’t need to be. Althi have done a good job on the title, that is without a shadow of a doubt. However, it really does not match up to the quality that has come to be expected from this developer. If you are looking for a game that is dumb and fun, pick up Zombie Swing. Afterall, it’s not gonna cost you an arm and a limb.