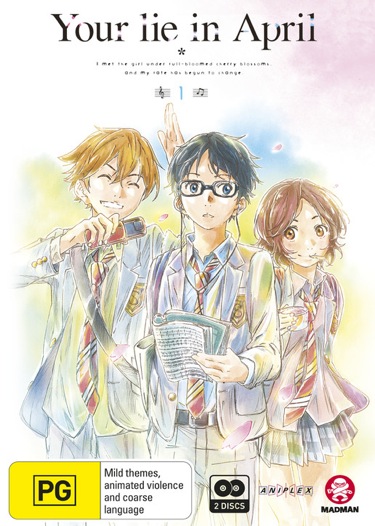 Your Lie in April Part 1

Musical prodigy Kousei Arima suddenly stopped playing the piano two years ago, after the death of his mother. One day, he accepts an invitation from his best friend Tsubaki to accompany her when she introduces someone to their best friend Watari. Arriving earlier than necessary, he encounters a person playing a melodica. Unbeknownst to him, the person is none other than Kaori Miyazono, the one who has a romantic interest in Watari. Her first impressions of him are ruined due to a misunderstanding, but she nevertheless shows an interest in him once Tsubaki introduces her to Kousei. Kaori turns out to be a violinist, and she slowly but surely reintroduces Kousei to the world of music and helps him rediscover his love for music, as well as his own happiness along the way. 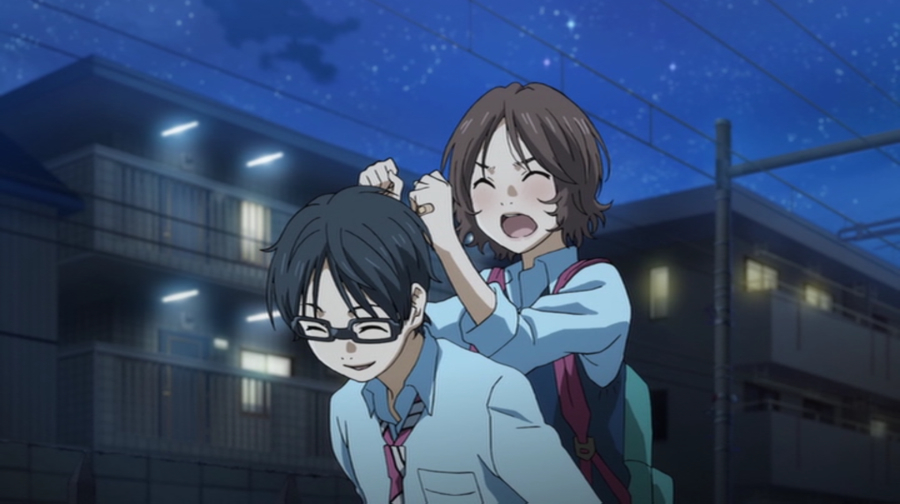 For the most part, the first episode has the appearance of being the introduction to a relatively normal romantic drama. However, Your Lie in April is far from ordinary. It is uncommon enough for the main protagonist of a manga or anime series to be a pianist, or any sort of musician, but there is a lot that make this series special. To start with, the interactions between the characters are nearly all realistic. Tsubaki has a tendency to cause Kousei injuries that should see him hospitalised, but unnecessary tsundere jokes notwithstanding, her feelings are portrayed with delicacy. She introduces Kousei to the girl who will become his first ever love interest, but soon realises that she has feelings for him. The struggle that occurs inside her heart is depicted through her words, thoughts and, just as significantly, through her silence. She opens up to just one minor character about her true feelings, leaving everyone else to wonder what is going on in her mind. The interactions between Kousei and Kaori are fairly realistic as well. Kaori is very hard on Kousei, but it is out of a selfless desire to see him be happy. She is also one of the most openly honest characters in the series. Some things are left unexplained, such as why Kaori seemingly does not realise that Watari is a playboy and also why people are able to get into Kousei’s house without any trouble. Thankfully, these jokes are never overused. Pop-culture references are also almost non-existent in this series. There are, however, clever references to Charles M. Shulz’s famous comic series Peanuts, as well as obvious references to classical musicians. A lot of thought has gone into the writing, and that effort helps this be an unexpectedly moving story. 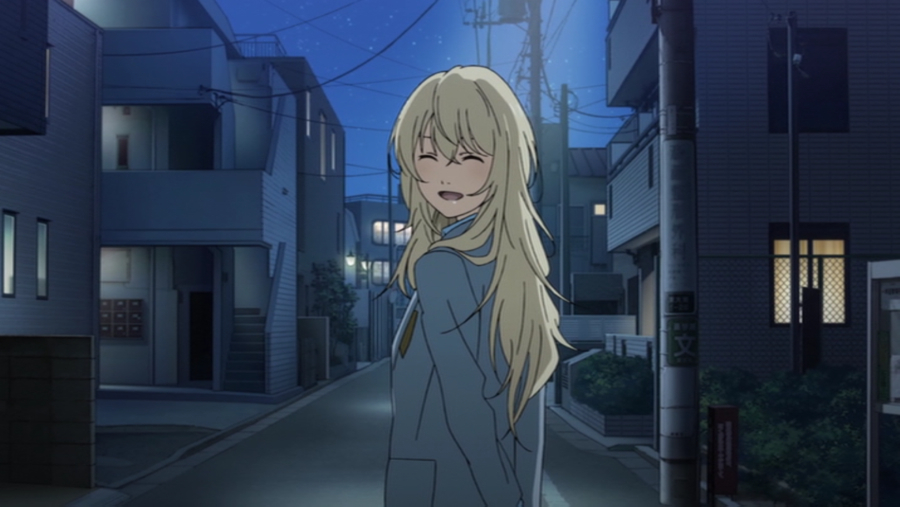 The characterisation of each of the four members of the group is not perfect, as evidenced by Tsubaki’s nonchalant violence towards Kousei, but it is easy to become attached to them all. Just like real people, they do not always share their emotions with those around them. One of the greatest moments featuring Watari is a scene in which he privately berates himself for failing his soccer team. The best moments of Tsubaki are those in which she reveals her true feelings. Likewise, the hardest scenes to watch that feature Tsubaki are the ones in which she is clearly suffering emotionally but tries to internalise her pain. Kaori has a major secret of her own that remains vague in the first half of the series, but she is one of the most inspirational and entirely believable characters to have appeared in the world of anime and manga in a very long time. Kousei himself takes a long time to open up, but his issues are very different to what everyone around him is going through. His past is extremely disturbing; his mother physically abused Kousei when he failed to play the piano exactly as she wanted him to. These scenes are painfully detailed, but they explain why Kousei’s mental image of his mother is so warped and why playing the piano is so difficult for him. Aside from the child abuse, this series features an compelling story.

The visuals are stunning. The colours are vibrant, the animation is consistently fluid and the musical performances look realistic. The latter could possibly be caused by rotoscoping, but it looks more like 3D CG animation. Either way, the end result brings this adaptation to a whole new level. The character designs all stand out, and an enormous amount of detail goes into drawing the beautiful backgrounds and the lips of the main characters. The level of effort that has gone into the animation is even seen in the way each character’s hair flows. Some footage is reused at various points for various reasons, but still frames are not overused, giving every episode a level of fluidity rarely seen in television anime. Fan-service is non-existent, and one member of the production team even seems to make a joke about fan-service by censoring the image Kousei accidentally took of Kaori’s skirt on his phone. 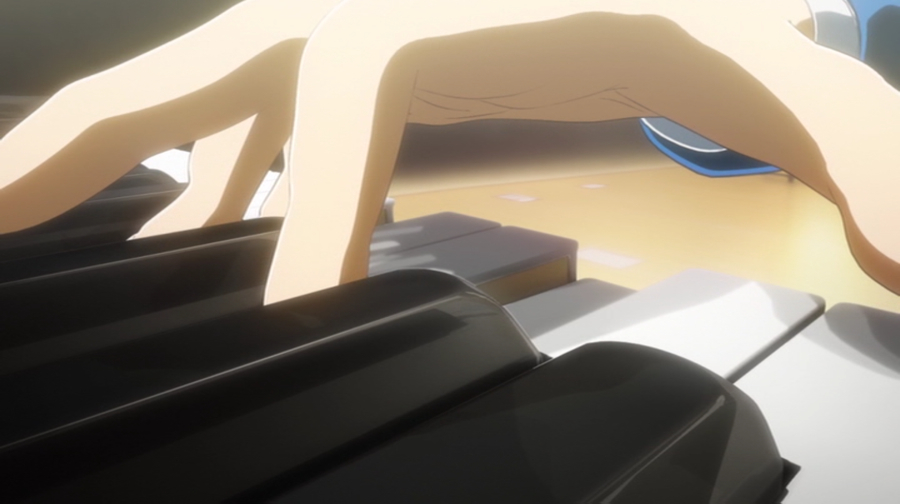 A show centred around music should necessarily contain high quality music. Masaru Yokoyama’s background music, along with the musical performances in many of the episodes, all fulfil this need. Everything about the music is fantastic. Yokoyama’s background music almost feels alive with emotion; all of the music is beautiful to listen to and often moving. The opening theme song is catchy, and the ending theme song is pleasant to listen to as well.

The voice acting stands in the English dub. Max Mittelman turns out to be surprisingly well cast for the role of Kousei. Erica Lindbeck does an excellent job of portraying Kaori Miyazono’s various emotions, and the same can be said about Erica Mendez and her portrayal of Tsubaki Sawabe. Kyle McCarley also immediately comes across as a natural choice for Ryota Watari. The script is brilliant and well-translated, and the supporting voice cast members all help to make this one of the best and most sincere English dubs ever produced for an anime series. 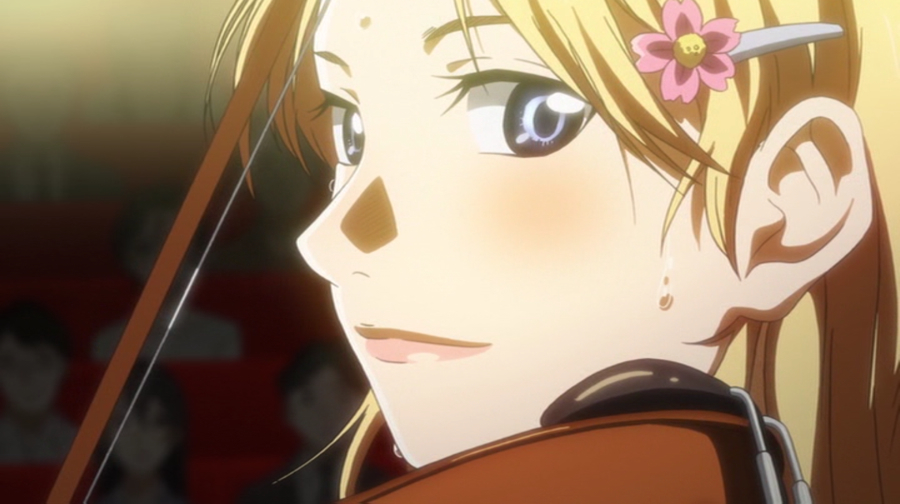 The extras, all of which are featured on the first disc, include the textless version of the first opening and ending animation sequence and commentary for the first episode. The opening animation in particular stands out as being one of the most visually stunning opening sequences in recent anime series. The ending animation is also beautiful. Another incentive to watch these extras is the inclusion of English subtitles with their presentation here; no vocal songs are subtitled in any of the 11 episodes. The commentary is very informative of the process of dubbing this series into English. The four main cast members discuss how they came to be a part of the dub and what it was like recording the audio. The ADR director Patrick Seitz also discusses how much time and effort goes into writing the lines for the dub and into casting the voice actors, as well as how important it is that such an unusually high quality show receives the best dub possible. The only thing that should have been included as on-disc extra but was not is a full list of the dub cast and staff members who worked on the English version of this series. Their effort really shows all the way throughout the dub.

It has some disturbing moments, but Your Lie in April is one of the most powerful and emotional series to come out of Japan this century so far. Everything works, and it all works together. The music, the animation, the characterisation, the writing and the voice acting all complement each other, resulting in something special. It may be hard to watch the scenes in which Kousei is suffering, but it is even harder to stop watching at all. Nothing feels too contrived, nor does anything feel meaningless. The series is at its best when it focuses on the core group of Kousei, Tsubaki, Watari and Kaori, but the introduction of the two pianists Takeshi and Emi adds another dimension to the story. Kaori is clearly suffering from some kind of illness, but no matter what the truth is, the conclusion of this series is sure to be even more powerful and moving than the events so far. 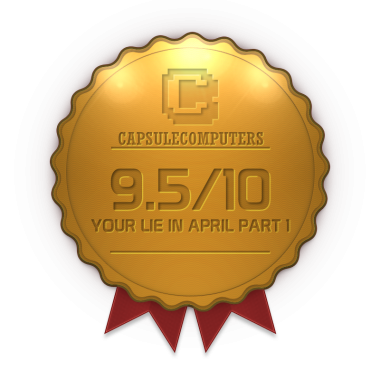 Your Lie in April is visually stunning and powerful and engaging, with excellent music throughout.
9.5