Vanguard is one of eight games recently released by SNK onto the Playstation 3 and Playstation Portable. Available on the Minis section of the Playstation Store, if you buy one copy of the game, it can be played on either system for no extra charge.

The first trait you’ll notice about the game is that it is completely retro. It appears that this game is a direct port from the original game released in the 1980s. Therefore, you should expect frequent deaths, different controls and some gameplay elements that are based on getting the most quarters into a machine as possible. 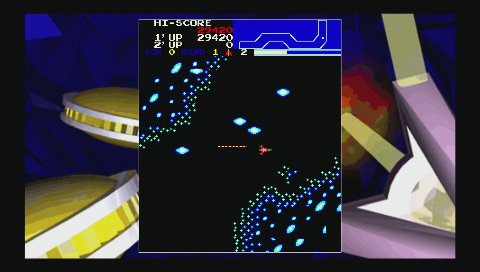 You pilot a spaceship through a variety of side scrolling and top down shooter levels. As you fly by brightly colored geometric shapes, enemies try to impede your progress by shooting at you, or by attempting to manipulate you into smashing into the walls. Like many older games, there are no health bars. One hit or mistake, and your toast. Luckily, in this game, you can insert up to 50 virtual quarters at a time and you can have up to 5 lives, so it eases the pain of death.

Of course, you also have guns to fight back with to reach your objective. The guns are actually the most unique part of Vanguard. It is possible to shoot in all cardinal directions (Up/North, Right/East, Down/South, and Left/West). Interestingly, the controls for the guns are mapped to the face buttons of the controller. This approach to controls for shooting is novel and is a great mechanic, allowing for different strategies. It also adds one more thing to keep track of, which can a positive or negative feature depending your thinking. Although this game is over 20 years old, the face button control system could easily be introduced into a modern game and it would be an innovative and nice change of pace from the endless parade of twin stick shooters. 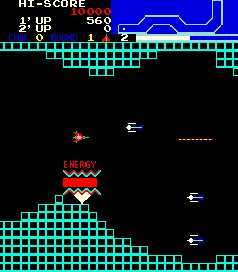 The most frustrating part of the game is that although I expected the game to be tough, this game is more difficult than most because of cheap deaths. Oftentimes, a ship would spawn in the middle of the screen right off the bow of my ship and kill me immediately. This issue was compounded by some hit detection problems. For example, in the above situation when a ship would appear by magic, I would be firing like a madman, trying to anticipate it. Yet, most of the time, I would still die instantly. 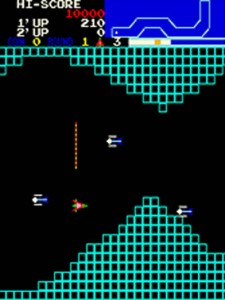 Overall, Vanguard is an addictive, entertaining and good experience. It is easily one of the best of the recent releases from SNK Playmore. The lack of HD graphics and annoying deaths do make playing it a chore sometimes, but most of the time, it is highly enjoyable. There is a variety of enemy types, solid level design and lots of action. In addition, it is truly amusing to see how the shooter genre has evolved, and to see how it could be improved. I would love to see a remake of this game or have another developer expand on the control system. All in all, for $2.99, this game is a blast. Try it.